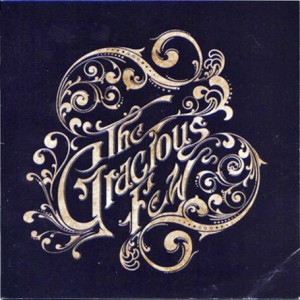 After a band breaks up, the post-fallout projects can take several forms: the contractually obligated solo album that its label consequently ignores (too many examples to list); the farce (Skid Row without Sebastian Bach, etc.); the fun, successful supergroup a’la Velvet Revolver or Damn Yankees; or the entirely new band, such as Audioslave, who add quality new music to the literature of rock ‘n’ roll from the pieces of their former selves, a gift to the fans of each band that could never have happened any other way.

The Gracious Few fall into the latter category, as their self-titled “debut” album (Live and Candlebox have about 20 years of history each) presents a balance of grit and sweetness, anger and tenderness, heartache and joy, all wrapped around a chewy cathartic center. Success and contentedness may enrich a band’s bank account, but good art comes from crisis, tension and having something to prove. Gracious Few’s self-titled release has the cohesiveness in sound of Live’s Distance to Here and the guts of their Secret Samadhi with the free-spirited, supple arrhythmia of Candlebox’s lyrical style. The album has imagery and metaphor, headbanging riffs and swaying melodies, crafted lyrics and overall wisdom that “new” bands just can’t muster. This record needs more ears and appreciation so that they have the freedom to keep touring and writing for this joint project.

The album began when the guys formerly from Live (minus Ed Kowalczyk) had a handful musical ideas, Patrick Dahlheimer said, and it coalesced when they got together to play and write with Candlebox’s Kevin Martin and Sean Hennesy. They worked out a good chunk of  the music in four to five months, among sessions at Dahlheimer’s studio in Pennsylvania and in Sausalito, California, which is where the oceanic imagery on the record comes from. With Candlebox on hiatus for two years as they work out some contractual changes with their publishing company, Martin said this is expected to be his (and presumably Hennesy’s) focus through 2012. He promised that good things are in store.

This reviewer has the utmost respect for the Live band members to take on a “rebuilding” phase (Dahlheimer’s term) with a new group. On the one hand, a small crowd in a club is disappointing because the band members’ talents deserve to be heard by the huge, packed houses that they’ve routinely played over their lifetimes. On the other, it’s a pleasure to be able to see them up close and personal. Just in case Gracious Few graduate quickly to the arena circuit, go and see them on this small club tour while you can. 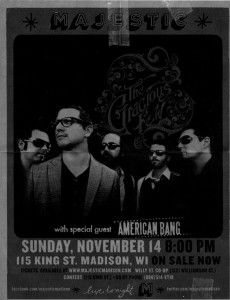 Their live show at Madison, Wisc.’s Majestic Theatre Nov. 14, 2010, was an intimate, raucous treat where the band played the album in its entirety, previewed a song from a forthcoming (spring 2011) EP of music they’ve found inspirational and threw in a couple of tasty extras (no Live or Candlebox songs, though; this is a new project). Chad Taylor may not currently be running around the stage like a crazy man (the result of a torn knee ligament from a stage accident in Chicago prior to this show), but that doesn’t mean there’s a lack of energy. A small venue provides the compression that makes the engine run hot. You’ll be able to actually make eye contact with drummer Chad Gracey, who’s been so far away on the stage at major festivals that he’s practically in the next county. You’ll be able to literally feel the angst in the downtuned guitars and delight in shrieking along with Kevin Martin during the band’s intense moments. Their live show is a good time that reminds you why you love rock ‘n’ roll. Reawaken, revisit your former self and find some new friends along the way. No prior experience with Live or Candlebox required.