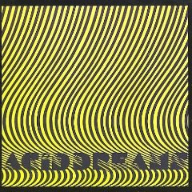 I won’t pretend to be a scholar of the garage-psych genre, but I know what I like and Acid Dreams on the tiny Past & Present label has a number of enjoyable moments.  If we are to believe what’s written on the back cover of the CD, this comp was originally presented by a Berlin record shop owner back in 1979 as he attempted to show his patrons how the origins of punk rock could be found in the recordings of a number of American garage bands that had taken a stab at hitting the big time back in the 1960s.  Although the merchant only pressed 77 copies of the record for sale in his store, Acid Dreams became semi-legendary over the decades as a great document of history in the making.  The comp plays much like the Nuggets or Pebbles series, with much of the material being available elsewhere, whether on full CD releases by the bands or on other comps.  Lovers of the bands represented are urged to seek those reissues for the complete picture of what the band was trying to accomplish.  Those seeking a good sampling of the genre will dig Acid Dreams just like I do.

One of the groups that were a favorite of the German archivist, and hence had two tracks included on the comp, was Velvet Illusions.  This septet from Yakima, Washington had gained notoriety for a tune called “Acid Head” (presented on this comp) back in 1967.  Ironically, the song had an anti-drug message and was written by a combo of tea-totaling teenagers, but that didn’t prevent the song from being banned from the airwaves and embraced by the hippie crowd.  Velvet Illusions made the big move from the Pacific Northwest down to Hollywood in the attempt to establish their career, but their sad story mirrors that of so many other groups with the same aim.  Their Vox guitars and organ had that classic garage psych sound, yet the youngsters couldn’t hold it together long enough to wait for fame that didn’t arrive instantaneously.  They had an organized attack from managers and marketing reps, visited the hippie hang outs to see what was happening in the scene that they didn’t really belong to, had a sax player in the group (Frank Zappa once wrote that it was essential to have a sax player or a band couldn’t get a gig in the ’60s), and even had their own theme song, “Velvet Illusions” (also on the Acid Dreams comp), yet widespread success was not in the cards.  They lost touch with one another over the years, yet left us with brilliant recordings.  Check out the creepy organ, self referential lyrics, and driving bass on “Velvet Illusions” or the Piper-era Pink Floyd murk and military marching drums of “Acid Head” if you doubt me.

For a heavier, yet equally impressive take on the emerging psych sound, give a listen to “City Jungle Part I” by Beautiful Daze.  This Hollywood, California, outfit deployed sweet vocals and harmonies with a devastatingly fuzzed out guitar attack as they attempted to sway the masses.  The longest song on the comp, at nearly six minutes, “Jungle” understood what Hendrix or Blue Cheer were all about as it let the amps ring feedback through the heads of their foggy audience.  The sound provided that contradiction that made Jefferson Airplane so famous—a tuneful vocal track backed by Jorma Kaukonen’s blistering atonality.  Speaking of the San Francisco sound, pay attention to “Shadows” by Vejtables.  This song is pure psychedelic gold with a bouncing bass line, echo chamber drums and equally distant background “whoa-oh-oh” vocals.  It’s a song not sung by lead singer Jan Errico (later of Mojo Men fame) and is all the more gloomy and seductive because of it.

One of the better known groups featured on Acid Dreams is Corpus Christi’s Zakary Thaks.  None of the members were older than 17 when they released “Can You Hear” in 1966, yet there was a maturity and clear direction behind their stinging guitars and powerful rhythm section.  They also had a mildly British Invasion fell to their “bah ba-ba-ba-ba-bah” backing vocals, yet they charted a course not taken before or since and may have been lost in the passing of the years if not for comps such as Acid Dreams.

I could listen to this music all day long and never get tired of it.  Garage psych is firmly planted in the 1960s, but it has a timeless, heady quality as intended by some of the more talented acts in the scene.  Acid Dreams should be used as a road map by collectors that want to know where to start when acquiring full albums and what attractions to avoid as they continue on their trip.