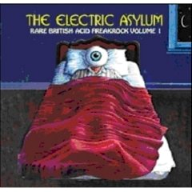 While it’s often thought that psychedelic music disappeared with the close of the 1960s, more discerning and diligent investigators such as the visitors to this website are well aware that psychedelia merely sank its claws into the brains of musicians during that decade and then went on to infect the minds of scads more in the decades that followed.  This is especially true for British performers from the early 1970s offering a brand of pop music dubbed “Freakrock.”  “Freakrock” doesn’t exhibit as sharp a cutting edge as that found with psych rock as the aims of many groups seemed to be more upon cashing in on a fad than on making an artistic statement, yet “Freakrock” has a charm all its own and is not without its merits.  Thus the Past & Present label found it necessary to compile some of the more interesting songs from this “Freakrock” era on its Electric Asylum series.  To date there have been three releases in this series and I’ll examine the first of these in this writing.

The Electric Asylum Volume One does not feature any household names as the best known artist is Vincent Crane’s Atomic Rooster and their wiggy ditty “O.D.”  What I found more intriguing, however, were some of the acts that I had never heard of such as Asylum, Monsoon, Galahad, J.C. Heavy, and Legs.  London’s Asylum, for instance, have a bright pop rock sound reminiscent of what we heard from Sniff ‘n’ the Tears in the early ’80s (yet with a cleaner guitar treatment), with excellent performances from their drummer and guitarist.  On Asylum’s song “Suzy’s Back” they’re using a synthesizer for some sort of fizzly fart noise that I imagine they felt was “freaky.”  Say what you will, but Asylum was quite well known in London in 1973 and ’74 and I doubt you’ll be able to get “Suzy’s Back” out of your head once you’ve heard it, whether you think it’s “freaky” or not.

Monsoon’s “Night Of the Fly” gets its freak on by using odd lyrics, tinkling piano, buzzing guitars and conga drums.  Again, Monsoon were hoping to bring the world another off-kilter, 3-minute pop gem like other groups on this compilation, but they were swatted aside by bands with more aggressive promotion behind them.  It’s just one more song that’s ridiculously catchy and would have remained off of our radar if not for Past & Present.

Galahad took a different approach to freakytown by blending a stomping Gary Glitter glam beat into their tune “Rocket Summer”.  There are washes of gated “hey” vocals beneath a very soul inflected lead and high falsettos.  They also opted for spoken word sections on their dance number that describe a crowd watching a rocket’s launch.  Buzzed up guitars and many percussion devices are used as on “Night Of The Fly,” but the elements are kept to their place within the mix rather than leaping out to call attention to themselves.

J.C. Heavy’s “Is This Really Me”, the B-side to their single “Do You What You Like” (also featured on the comp) has a feel that’s akin to Uriah Heep or Deep Purple in the early ’70s and features outstanding vocals from Josephine Levine.  Their freakout is lit up by the intentional deep inhale and respondent eventual exhale of a mystery substance before Josephine starts singing.  The Manchester combo could easily have passed as a more disciplined version of Big Brother & The Holding Company had they been able to hold it together longer and were not so obviously British.

Another group that stands out above the rest of the inmates in The Electric Asylum is Legs, fronted by Elmer Gantry.  Their “Faces” is a slung-down-low boogie number with a south of I-10 guitar lead, solidly pulsing bass, and chicken pecking percussion.  Just like J.C. Heavy’s contribution, it feels like it’s part of some other genre but lets its freak flag fly alongside the banner of the other early ’70s British, mildly psych-tinged rock combos.

The Electric Asylum gives us music that is far more light-hearted than that found on garage psych or psych-prog compilations.  There’s also less British Invasion influence than you’d find on a garage psych collection and certainly no proud art statements like those offered by psych-prog musicians.  These songs can’t really be considered near hits as they often seemed to be aiming for targets in another dimension entirely.  Past & Present is again pointing us in the direction of artists whose catalogs we may want to seek if we enjoy what’s on this sampler.  Oddly, though this music is not as old as garage psych, it’s going to be much harder to track down, and in some cases, is not nearly as rewarding as other types of acid rock.