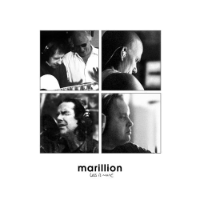 Marillion continue on their merry musical adventure, revisiting an album’s-worth of songs and stamping them anew in a leaner, focused light. The aptly titled Less Is More isn’t a watered-down album of hard rock “unplugged,” changed only by the use of acoustic instruments; rather, Marillion take a set of songs and treat each like molten glass, carefully reshaping by twists, turns and swirls. And it is a fan delight. Less Is More avoids obvious retelling of tracks such as “Script For A Jester’s Tear,” “Sugar Mice” or “Easter” and instead digs up lesser-known tunes, often from lesser-lauded albums including This Strange Engine, marillion.com and Anoraknophobia, and reinvents them. The sound is intimate and spectacular, and the highlights are many.

The already exotic “Interior Lulu” blooms with even stranger flowers, its petals misted with bongos, shakers, bell trees and rain sticks. “The Space,” from Seasons End, is transformed from a symphonic progressive-rock epic into a smoky jazz-blues crawl under Pete Trewavas’ acoustic bass. If there’s a hint of a hit here, it would be “Hard As Love,” from Brave. Where the original version is a charged rocker with plenty of scalding guitar from Steve Rothery, the Less Is More version is like an Alice In Wonderland calliope ride fueled by Mark Kelly’s pipe organ. The basic structure is there, but the chorus has been re-arranged into something brand new and wonderful. “Wrapped Up In Time,” from 2008’s Happiness Is The Road, is condensed into a work of shimmering beauty – Steve Hogarth’s voice melts into The Preston Bisset Singers, serving as choir, and Mark Kelly’s glockenspiel gives the track extra sparkle.

Marillion cover Marillion and make the old new. I’m not surprised. Are you?