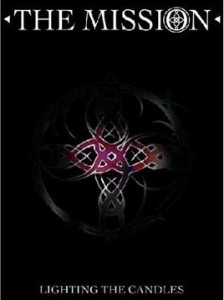 The Mission – Lighting The Candles DVD

In October 2005, SPV released the first ever DVD collection of material from The Mission (know in the US as Mission UK).  For fans of the group that had been treated to numerous VHS compilations, 12-inch singles, customized art pieces, and limited-edition vinyl offerings over the years, this was yet another gift to them by front man, Wayne Hussey, who also produced Lighting The Candles.  Because it’s accompanied by a significant amount of footage describing the band’s early days and metamorphosis from goth pretty boys to stadium rockers and back, Lighting The Candles is actually a great place to start investigating what made this band so special.

Lighting The Candles is composed of two DVDs and a live CD.  The first DVD presents a full live show from April 13th in Köln, Germany, filmed for the long-running Rockpalast TV show.  The second DVD is chock full of specially produced material covering rehearsals for the live gig, interviews with the band, a band biography narrated by Hussey, a full band discography also narrated by Hussey, a collection of promotional videos, and some live Hussey solo material.  The CD contains performances from various nights on the tour which took the band through Köln.

One notable thing about the live DVD is that Hussey seems less concerned with making the music larger than life and more in touch with playing the songs that the fans want to hear in a more relaxed setting.  This was a big criticism of the group back in the late ‘80s – that they were “bombastic” and sounded too much like Led Zeppelin.  While they did flip a finger to their critics by hiring John Paul Jones to produce them early on, they also began to understand that they needed to be able to relate directly to the fans that would continue to support them long after the pop success had dried up.  Hussey kept this as his sole focus amidst numerous changes to the band line-up, geographical relocations of the band’s base of operations, and his own waning interest in the band’s fortunes.  Lighting The Candles is exhibit A in Hussey’s personal mission.

The touring line-up for The Mission in 2004 delivered a sound that even long time fans may not have expected.  Aside from Hussey on lead vocals, occasional keyboards, and exceptionally capable rhythm guitar, we’re treated to performances by lead guitarist Rob Holliday, who played (and still plays) with Gary Numan, The Prodigy, and Marilyn Manson.  Holliday lends a metallic edge to The Mission’s sound that, while different in approach to that used by previous guitarists, added a great deal of excitement to the shows.  Drummer Steve Spring and bassist Richie Vernon round out the group.

The band tear through songs from throughout The Mission’s history, including early single “Crystal Ocean” with Hussey on 12-string guitar, “(Slave To) Lust” from their most recent studio album, Aura, a brand new single called “Breathe Me In” (topping the Alternative chart in Germany at the time), and “Belief” from their 1990 release, Carved In Sand.

Some of the better tracks featured on the CD include the next night’s performance of “Hymn (For America)” from 1988’s Children in Utrecht, Holland, “Severina” from their first record God’s Own Medicine as performed on April 22 at Gloucester Guildhall in England, another song from Children, “A Wing And A Prayer” from their April 24th performance at England’s Whitby Pavillion, a track from their 1990 B-sides collection, Grains Of Sand, “The Grip Of Disease” from an April 15th performance elsewhere in Germany, and “Daddy’s Going To Heaven Now” off 1995’s Neverland from the Holland show.

The Mission has accomplished quite a bit since their origin in 1986, and you can catch up on what you’ve missed by watching and listening to Lighting The Candles.  It’s not often that a band has such an extensive summary of their career available, let alone one with full participation of the principle songwriter.  It’s hard to say what we’ll see from the band in years to come as Wayne Hussey has been focusing on his solo career for the most part.  Nonetheless, their following in Europe is huge and we Americans may reap the benefits should The Mission mount another tour in support of new material or in celebration of their excellent catalog.  Even if they don’t perform stateside, it’s likely that Hussey will take part in future projects that suit fans and newcomers alike as is the case with this set.