The first concert I ever attended was in 1978 at the old Riverfront Stadium in Cincinnati, Ohio. It was a trifecta of musical talent featuring a young Eddie Money, Steve Miller Band and The Eagles. It was the first of dozens of concerts for me, as I strove to see all my favorite bands of the day. Nearly 35 years later, there are still a few bands and artists on my bucket list – those acts, for some reason or another, I never was able to see live. Roger Hodgson was high on that list.

For music lovers who were around in the 1970s and early 1980s, Hodgson’s voice and songs, via Supertramp and solo, were running across rock radio and spinning around turntables across the country – and world. They became part of the culture and soundtrack of that time and our lives, and many of those people he touched were in attendance at Friday’s show in Hinckley. Myself included – finally! 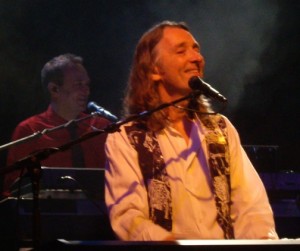 Genuine is the best word to describe Hodgson’s performance and songs. From the moment he took the stage, grinning like a Cheshire cat, it was very evident that Roger was glad to be there, performing his songs for a packed house eager to listen. As the first keyboard chords rang out and the familiar spin of harmonica answered to announce the beginning of Supertramp classic “Take The Long Way Home,” you knew this was going to be special. Hodgson sets a very musical and enjoyable vibe that goes beyond the songs themselves, whether telling a story or having some fun with the audience. For example, after the show opener a few stragglers entered the Convention Center, and as they walked toward their seats Hodgson announced, “You’re late! I guess we’ll have to start the show again.”

The 18-song set list featured a slew of Supertramp classics along with three songs from Hodgson’s solo releases: “In Jeopardy” and “Lovers In The Wind,” from 1984’s In The Eye Of The Storm; and the Irish-folk-tinged “Along Came Mary” from 2000’s Open The Door. These are all excellent tunes and a teaseful taste of Hodgson’s post-Supertramp output. In my dream set list, he would have also played “Had A Dream (Sleeping With The Enemy),” but that’s one fan’s very minor quibble.

My favorite part of live performances is connecting – or reconnecting – with an old song in new ways. For me, one of those moments occurred when Hodgson played “Even In The Quietest Moments” with no further accompaniment other than his 12-string guitar. It was the perfect way to hear the beautiful chord structures and basic framework of the tune. Absolutely mesmerizing. My other highlight was hearing “Fool’s Overture,” a 10-plus-minute composition that brings three different pieces of music together into one epic journey. It is also a showcase for Hodgson’s incredible voice. No one sounds or sings like Roger, but that he’s hitting the same high notes with the same sustain – and with no apparent strain – some 40 years into his career is remarkable. And it’s not just “hitting the notes”; the timbre, or sound quality, of his voice is as strong as ever. Hearing him climb the musical ladder to sing, “And though the wound went deep/Still he’s calling us out of our sleep” is worth the price of admission.

As Hodgson led the crowd through song after song, you could feel the momentum and energy building. Just when it seemed like the audience was ready to pop like a jack-in-the-box, Roger invited everyone to gather around the stage as he ran through “Dreamer” and then emerged for the encore, “Give A Little Bit.” The response and enthusiasm was super high, and I believe Roger was even surprised as he remarked,” Wow, you really get into it here!” Yes we do.

P.S. Hodgson’s backing band played flawlessly, and though I don’t mean to exclude anyone I have to mention the incredible performance of Aaron McDonald, who played the harmonica and many horn parts to perfection. He is an amazing and multi-talented musician who always seemed to have a different instrument in hand.

A special thank you to Linda Tyler of Harmonic Management for all her help. Thank you!