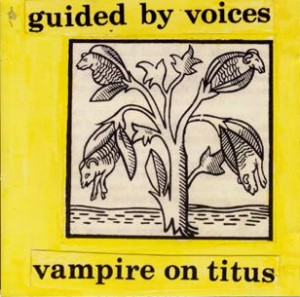 Indie rock poster children Guided By Voices are enjoying a resurgence of popularity these days with the release of a new album.  Coincidentally, I’d recently purchased my first GBV CD, a “two-fer” of the band’s fifth and sixth records, Propeller and Vampire On Titus, originally issued on the Cleveland, Ohio, label Scat Records in 1993.  GBV is a group that has not gotten any easier to describe in their 30 years of revamping their sound.  As I listened to my newly acquired disc, I realized that the first glimpses of what had contributed to the group’s fame were included on this recording.

Propeller first saw the light of day in Dayton, Ohio, as a special “farewell” package distributed in 1992 among the group’s cult of followers.  The limited vinyl run of 500 copies was first lovingly decorated by the band and their entourage so that each fan’s version was completely different.  These original versions (on the Rockathon label) are now worth thousands of dollars each.  Propeller was paired with Vampire On Titus when band leader Robert Pollard decided not to disband the group after all, morphing GBV into a studio-only ensemble.  Vampire On Titus was released by Scat in a limited-edition version with Propeller added after the new album’s running order on the CD.  This is the version that I just bought.

Guided By Voices present the history of rock and roll all at once, with prog, punk, British Invasion, and garage-rock psych all holding equal status.  Early releases are completely lo-fi, with primitive recording techniques actually used to help craft the band’s sound.  In the case of Propeller and Vampire On Titus, I quite prefer the slightly older material of Propeller, so I’ll begin describing the songs there. 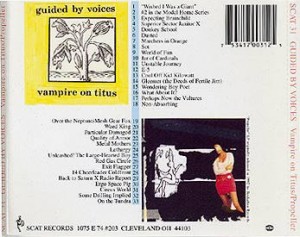 Propeller at times feels as if the songs so urgently demanded attention that they were committed to tape before they were finished being written.  You’d think that would be a drawback, but remarkably it’s not.  For instance, the majesty of “Weed King” is exhibited well before the pomp and circumstance can become long winded.  Had it been written and recorded by Traffic, it would have stretched on for 18 minutes rather than GBV’s 2 ½ before making its point.  The stony lyrical delivery beneath a monumental guitar battle arrives just long enough to blow our minds before evaporating into “Particular Damaged.”  That song churns along beneath Pollard either hallucinating or slurring his words.  The rising chaos and noisiness then fades out as if we’d imagined the whole thing.

“Metal Mothers” similarly becomes a two-minute epic with its early Pink Floyd chord changes and Byrds guitar jangle, leaving plenty of room for a stadium-rousing guitar solo before the fade-out.  “14 Cheerleader Coldfront”, though no less murky, employs acoustic guitars and sweet, pop harmonies to get its message across.  “Ergo Space Pig” trashes it up with intentionally inept drumming and vocals sung through some sort of vacuum cleaner/guitar device.  “Some Drilling Implied” is a fuzzy industrial metal approximation fronted by Pollard in the guise of an Australian surf punk.  Fifteen songs blur by before we’re fully aware of all that GBV have forced us to experience.

Vampire On Titus shows Pollard trying to formalize his thoughts a bit more.  The songs are still rather lo-fi, but slightly less so.  Oddly, the tunes are shorter on average, but even more intriguing.  For instance, “Superior Sector Janitor X” conceals its chiming acoustic guitar beneath distorted and damaged vocals.  It’s less than a minute long.  “Dusted” plows through our brains in just over two minutes.  It’s nearly impossible to understand Pollard’s words beneath the only-just-restrained metal guitars and thundering drums and it ends before the impending guitar solo can quite take sail.

“Marchers In Orange” sounds like the sketch to a Kinks or XTC song about fading British nationalism or the rigors of living in the countryside, yet it’s less than a minute and a half of breathy, sea shanty vocals accompanied by wheezing accordion.  And “Gleemer (The Deeds Of Fertile Jim)” threatens to become an R.E.M. number with too many down strokes to the guitar strum.  The vocal harmony parts point more in the direction of country rock, however.  Seriously, what would you call this music?  It’s everything and nothing all at once.  Completely original and absolutely fascinating!

Guided By Voices records (and there are a ton of them) can vary wildly.  But there was an undeniable magic captured on their early- to mid-90s releases.  The band members featured here are the same line-up that’s reunited for the new record and supporting tour, so it’d definitely be interesting to see if that magic can be recaptured after all these years.  Just in case it’s escaped them on this outing, we still have the spellbinding documents of their early records available for sale and it’s fun seeing what all the ruckus was about 20 years ago.