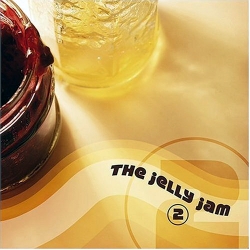 I forgot how great this album was until I gave it a listen over the weekend. Jelly Jam? You ask? A power trio for the 21st Century, composed of guitarist/vocalist Ty Tabor (King’s X), bassist John Myung (Dream Theater) and drummer Rod Morgenstein (Dixie Dregs). This threesome came together for two albums (still waiting for #3 guys!). Their second release is a 12-track mix full of the crunchy guitar sounds and sparkling melodies that Tabor specializes in, along with Myung’s seemingly effortless bass grooves and Morgenstein’s superb drumming. It’s heavy, raucous, mellow, full of surprises and just damn good. In many ways, it showcases Tabor’s songwriting abilities, guitar playing and singing in a way that King’s X can never do.

So many highlights here, but I’ll throw out two: Check out the multi-tracked vocals, Tabor’s nasty guitar riffs and rhythms, Myung’s rolling bass lines and Morgenstein’s jaw-dropping playing on “Empty.” And in “Angel Or Devil,” Tabor has painted his masterpiece, examining the line between the choices one makes for good or bad in one of the most beautiful musical stories he’s ever told or played on.