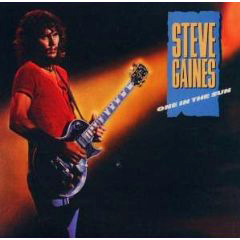 One In The Sun is Steve Gaines’ lone solo album, released nearly 15 years after the tracks were first recorded. Gaines’ own time in the sun was cut tragically short by the plane crash that took his life, his sister Cassie’s and Lynyrd Skynyrd bandmate Ronnie Van Zant’s. The personal tragedy was compounded by the musical tragedy, as Skynyrd had recently released what would become a Southern rock classic in Street Survivors. Gaines’ musical contributions to that album and the live One More From The Road gave Skynyrd a much-needed second wind. I always liked what I heard from Gaines on those recordings but it wasn’t until I saw live tape of him on stage that I appreciated how damn good he was on guitar. Watching him and Allen Collins rip through the solos on “Free Bird” for the first time made my jaw drop. Gaines could and did shred with the best of them, and we can only imagine what higher heights Skynyrd would achieve had the band’s plane not gone down in a Mississippi swamp that fateful October day in 1977.

One In The Sun represents a stylistic detour from Gaines’ work in Skynyrd. Instead of tearing down the honky-tonks and singing about sipping whiskey, Gaines showcases his R&B background and session-man mentality across a diverse set of songs, ranging from the R&B vibe of Curtis Mayfield’s “It’s Alright” and  the reggae-inflected “Black Jack Davey” to the Latin beat of “Take My Time” and full-up funk of “Summertime’s Here.” Gaines lays back when needed, and what he does play is tasteful and supports the song. He’s also a pretty soulful singer. Check it out!