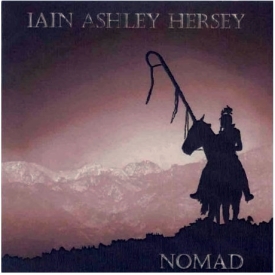 If you ever wondered what happened to old-school hard rock – the kind you used to plunk into the car’s 8-track or cassette player before dropping the pedal on a Friday night – you’ll find it in spades on Iain Ashley Hersey’s latest album, Nomad.  Iain Ashley Hersey, you ask? Granted, Hersey is no household name, but his music quickly brings bands such as Deep Purple, Rainbow, Led Zeppelin and Bad Company to mind. Hersey is a Fender-Strat-totin’ rocker who deserves a much wider audience. Although Hersey wears his influences on his sleeve, on Nomad (Perris Records), in many ways, he’s bettered the more recent efforts of his classic rock forefathers.

The 10 tracks on Nomad are heavy, bluesy and damn good. They abound with meaty Hammond organ chords, tasty guitar riffs and plenty of attitude. Hersey’s backing band – Holger Seeger (keyboards), Carsten “Lizard” Schulz (vocals), Frank Kraus (drums) and Jochen Mayer (bass) – lock down tight on these tunes and make them jump out of the speakers. Schulz is a terrific singer, with a Glenn Hughes vibe that’s perfect for this material. I love his ability to shift from the golden “Vintage Love,” to the nasty crawl of “Flesh, Blood & Bone.” Hersey’s guitar riffs and tone will resonate with anyone who fell under the spell of Ritchie Blackmore or Jeff Beck, and his solos are the epitome of taste, always serving the music.

Songs such as “Sacrifice The Sun” and “Vintage Love” could have been recorded 25 years ago, but they sound fresh and vital in 2008, a real testament to the strength of the music. But there are plenty of surprises, too: I dig the the opening chords of “Bloody Waters,” which sounds a bit like The Mahavishnu Orchestra’s “Birds Of Fire”; the following track, “Voodoo Spirits,” opens with a playful accordion line straight out of the bayou, before charging ahead with an organ-heavy riff and powerful Schulz vocal. The tune also features a sweet Hersey solo. Played live, I imagine the song brings down the roof. My favorite track is “We’ve Lost The Rhythm,” a real burner that showcases the best of the band, and features some extraordinary singing by Schulz. Nomad closes with a fantastic cover of Rainbow’s “L.A. Connection,” brought to life by guest vocalist Doogie White. Blackmore and Dio would be proud. Hersey, as well, should be proud.

The video below of Hersey playing live in 2005 gives you some idea of his sound and style, but get Nomad, nonetheless. You won’t be sorry.