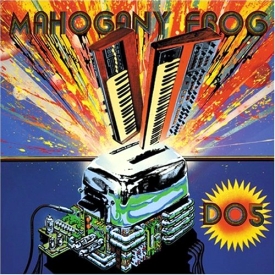 Mahogany Frog are a four-piece progressive rock outfit from Winnipeg, Manitoba, composed of Graham Epp (keyboards, guitars, trumpets), Jesse Warkentin (guitars, keyboards), Scott Ellenberger (bass, keyboards, percussion, trumpets) and J.P. Perron (drums, electronics). Mahogany Frog’s most recent release, DO5 (Moonjune Records), is their fifth, and served as my introduction to the band. DO5 features nine instrumental tracks with a range of sounds from vintage to modern. Expect plenty of tube-y keyboards, processed guitars, sound samples and energy. Although Mahogany Frog’s music is definitely experimental, it isn’t self-obsessed or pretentious. Most important, it’s highly listenable. One of this quartet’s particular strengths is melody, even as multiple layers of sound stream from their instruments, the songs have structure and stick-in-your head lyricism. That’s a neat trick.

The album opens with the short “G.M.F.T.P.O,” a blast of fierce guitar before venturing forth into the sonic explorations of “T-Tigers & Toasters,” whose beginning reminds me a bit of Gyorgi Ligeti’s groundbreaking music that was used for the soundtrack in 2001: A Space Odyssey. The song flows like a ripple that builds into a wave, with some gorgeous keyboards that go Canterbury before the guitars bust through, as if Neil Young’s Crazy Horse suddenly hit the scene, cresting the curl before crashing into shore.

“Last Stand At Fisher Farm” is a majestic piece, full of drama – sort of a new theme from an imaginary western – and one of the album’s highlights. “You’re Meshugah!” features some excellent drumming courtesy of Perron and recalls the heavier moments of early progressive acts such as Caravan, Nektar and Hatfield And The North; while “I Am Not Your Sugar” sounds like a Rush jam circa Caress Of Steel. “Demon Jigging Spoon” conjures up Tangerine Dream, Frank Zappa and Ozric Tentacles. These are all attempts to describe the band’s sound, but Mahogany Frog really have their own sound, thanks in part to the recording itself. DO5 is one of the most analog-sounding compact discs I’ve heard, with that indefinable warmth and coziness that turns vinyl lovers all glassy eyed. The album closer “Loveset,” may be my favorite of the bunch. I love the way it juxtaposes a lovely trumpet line against electronic loops and a wall of shimmering keyboard chords.

DO5 is a very impressive record with nary a wasted note or thought. It’s available for purchase at the Moonjune Web site. The video for “Lady XOC & Shield Jaguar,” below and one of the tunes from DO5, provides an excellent first-hand look at MH.

One thought on “Mahogany Frog – DO5 review”