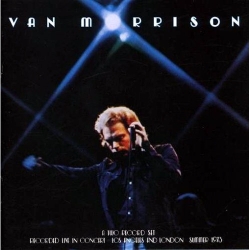 With more than 30 albums to his credit, not including greatest-hits collections, Van Morrison has an ample and incredibly varied catalog. Here are 13 of Van The Man’s best in chronological order spanning 30 years, from the well-known to the worth investigating.

1. Astral Weeks (1969) – His unclassifiable solo debut with songs that hang in the ether between rock and jazz. Not easy listening but endlessly rewarding. “Deep” cuts such as “Beside You” get better with every spin. A masterpiece.

2. Moondance (1970) - Morrison’s second flawless album in a row features two of his greatest songs, the timeless tribute to love, “Into The Mystic,” and the celebratory “Caravan.”

4. St. Dominic’s Preview (1972) – On the best of SDP, Morrison seamlessly crosses over between the impossibly buoyant “Jackie Wilson Said (I’m In Heaven When You Smile)” to the transcendent, “Almost Independence Day.” And his singing on “Listen To The Lion” could make James Brown’s hair stand on end.

5. It’s Too Late To Stop Now (1974) – One of the great live albums captures Morrison in top form with The Caledonia Soul Orchestra. Much like Bob Dylan would do when playing live with The Band, Morrison turns his own songs on their heads. He also proves that he’s the greatest white R&B and soul singer alive (ever).

6. Veedon Fleece (1974) – Morrison draws on mythology, Celtic and otherwise, on this atmospheric and mysterious album. Like Astral Weeks, this one takes at least 10 spins to really sink in. Alternately light-hearted (“Fair Play”) and haunting (“Streets Of Arklow”), Morrison sings here like on no other album – part crooner, part conjurer.

8. Beautiful Vision (1982) – An understated effort marked by sparse arrangements and a deepening journey into spirituality. Among the many treasures are the homeward-calling “Celtic Ray,” the infectious optimism of “Cleaning Windows,” the mysterious “Vanlose Stairway” and the final peace of “Across The Bridge Where Angels Dwell.”

9. Inarticulate Speech Of The Heart (1983) – Lush, synthesized – almost new age, ISOTH is as far removed from Moondance as imaginable. Regardless, Morrison pens two classics here: the rapturous title track and “Rave On John Donne,” which delves ever deeper into the cosmic muse.

10. No Guru, No Method, No Teacher (1986) – Another stunning album and a return to earlier form. “Got To Go Back,” “Tir Na Nog” and “Town Called Paradise” display more of the stream-of-consciousness writing that characterizes much of Morrison’s greatest work.

11. Irish Heartbeat (1988) – Morrison gets back to roots with The Chieftains on this irresistible collection of traditional Irish tunes along with his own “Irish Heartbeat” and a reworking of “Celtic Ray.”

12. Avalon Sunset (1989) –  Mellow as a summer evening, Avalon Sunset houses the incredibly beautiful “Have I Told You Lately (That I Love You)” and the terrific duet with Cliff Richard, “Whenever God Shines His Light.”

13. Back On Top (1999) – The old magic and energy is here in spades on Morrison’s best album of the decade. Songs such as “Philosopher’s Stone,” “High Summer,” “Reminds Me Of You” and “Golden Autumn Day” alternately swing and shimmer, fueled by the meditative musings that make Morrison one of a kind.