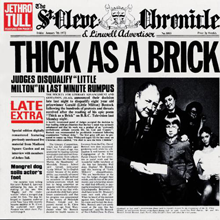 During Jethro Tull’s halcyon days (1972-78), Barriemore Barlow was the man behind the Tull traps, keeping time with Ian Anderson’s idiosyncratic musical visions. Barlow’s facility for playing hard rock, jazz, folk and orchestral percussion is not hyperbole but truth as evidenced on the album-length “Thick As A Brick.” This is a marathon effort from a largely forgotten talent.