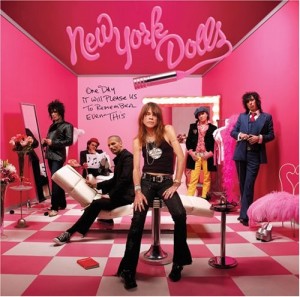 So, I recently reviewed the debut album from The New York Dolls and thought it also appropriate to lay some thoughts down concerning their “comeback” album from 2006, One Day It Will Please Us To Remember Even This.  Released on Roadrunner Records, which is primarily a metal label, the surviving two members of the original recording line-up, vocalist David Johansen and rhythm guitarist Sylvain Sylvain, sought to renew their camaraderie and create new music under the Dolls name and using as much of the Dolls’ grimy brilliance as they were able to muster some 32 years after their last proper studio release.  This record can be heard in two different ways.  If you’re looking for the same sloppy, drug-fueled energy that the band unleashed in the early ‘70s, you’ll be sorely disappointed.  But if you’re after some damn fine party rock and roll from veteran performers who can tell schlock from shock, and are able to use both tastefully, you’re going to love it!

Produced by Jack Douglas, who knew enough when to interject and when to get the hell out of the way, the album exhibits a balance of rough edges and professional performances.  There are really no low points across its 13 tracks, but it tends to build in momentum.  The listener will have been pulled into the world of the new Dolls and will be left asking for even more by the time the disc stops spinning.  The obvious difference, aside from the fact that chief architect of their original sound, lead guitarist Johnny Thunders is absent (had to be that way, the guy’s dead) is that the boys have grown up.  That’s not to say that they don’t appreciate juvenilia, but Johansen actually can write intelligible lyrics and he sings them in a voice carved by time and matured by world experience.  The band was rounded out by guitarist Steve Conte, bassist Sami Yaffa, keyboardist Brian Koonin, and drummer Brian Delaney, filling the holes made by the deaths of Thunders, drummer Jerry Nolan, and bassist Arthur “Killer” Kane.  Kane had actually taken part in a reunion concert shortly before sessions for this album, and had intended to be fully involved in what was to come, but he passed away tragically, not even aware that he had leukemia until days before leaving this mortal coil.  His departure hangs over the album, but not as a shroud.  This record feels more like a tribute to him and it celebrates his life and the contributions he made to the Dolls’ circus.

I’m not too concerned with trying to pick out cuts selected by the label or the artists’ media machine as “lead tracks,” but I’d rather tell you about a few songs that really stand out and produce genuine smiles and heartfelt appreciation for this endeavor whenever I hear them.  One of the best is “Dance Like A Monkey.”  Simply put, if you like amusing lyrics, driving rhythms set to a nearly tribal beat, and blistering guitars supporting Johansen’s sassy yet wizened voice, this is the song for you.  The band sound as if they’d been playing together all through these past few decades rather than for a few months and they defy you to sit still as they kick your asses.  Much of this can be credited to Douglas, who understood the challenges this new incarnation of the group was facing.  But when you watch the bonus DVD contained in the “special edition” package of this release, you see that Sylvain and Johansen didn’t get this project going just to cash in on a classic band’s legacy.  They’re totally into it, and the finished product is fantastic.

Skip on ahead to “Dancing On The Lip Of A Volcano,” featuring REM’s Michael Stipe on harmony background vocals, for more adult (as in grown-up, not X-rated) lyrics and a collaboration between a big fan and his idols.  Stipe, along with singer Morrissey, and E-Street Band guitarist Little Steven, was a big supporter of this reunion and it’s great to hear him put his efforts behind his emotions.  This is somewhat illuminating for Stipe’s talents as well, as his voice is sometimes taken for granted in the mix of REM’s output.  Here he shines proudly, his commitment unshaken, his instrument employed perfectly.  The bright tones of the distorted guitars, the added dimension from Koonin’s piano, and Stipe’s airy counterpoint to Johansen’s gruff delivery, make this one a keeper.  Listen also for an incredible jumble of words that Johansen would never have written three decades earlier to understand how things have changed for him personally.

Next up, “I Ain’t Got Nothin,’, lets Johansen show off the fact that he’s really an excellent harmonica player.  A slower number, concentrating on the near-despair of Johansen’s lyrics, the song stands out despite its lack of bombast.  “Rainbow Store,” one of a handful of songs for which the music is composed by Conte rather than Sylvain, sounds more like something the Dolls may have tried to concoct in their heyday, but could never have pulled off amidst the chemical haze and chaos of the past.  Sylvain, a big lover of ‘50s doo-wop, takes every opportunity to add in sweet oohs and coos in support.  You can practically see Johansen strutting across the stage with his smarmy attitude as you listen.

A union within a reunion occurs on “Gimme Luv & Turn On the Light” as fellow punk survivor Iggy Pop lends some tough background vocals to this bruised stomper.  Douglas again works his magic – did Iggy always sing alongside David?  Sure as hell sounds like it!  When he sees a chance to bust loose with some more blues harp wailing, Johansen takes it, weaving in and around Yaffa’s persistent bass and the shredding guitars.  “Take A Look At My Good Looks” closes out the set with a mid-tempo sap-fest composed by Johansen, Sylvain, and Conte.  The lyrics lean toward the gender-bendage of the Dolls of yore.  Can a man be pretty?  Depends on who the man is.  It’s evident that make-up can’t cover up all the 21st Century wrinkles reaching over the boys’ faces, but the song is also both sad and beautiful – in a Dolls kinda way.

Packaging and bonus material: First, as mentioned above, the special edition of the CD includes a bonus DVD showing the band in the studio, both horsing around and getting serious about the project.  You sort of need to watch this film, especially if you’re in doubt as to the integrity of the project.  There’s also a bonus track – “Seventeen” – in case the CD left you wanting more (as it surely will).  The CD booklet includes a stark, yet stylized, mini-comic book written and drawn by Leah Victoria Hennessey, which depicts a fictional origin for this incarnation of the group.  And finally, that album cover artwork!  It’s a lovely design using just the right shades of pink and rose to offset the wicked, fresh-off-the-streets sound of the music within.  Feminine?  Masculine?  A bit of both?  Who cares?  Just rock out and don’t worry so much!  Dave and Syl are back!  And this ain’t no Buster Poindexter thang, ‘cause Dave’s looking pretty shaggy again!

The boys tried hard to turn this project into something that would keep the money coming in for a while, but, unfortunately, the new Dolls didn’t seem to catch fire.  There are a couple of reasons for this.  One, this isn’t a punk record.  Folks that discovered the Dolls after it seemed we’d lost them in the mists of time may not realize that Dave and Syl were really only interested in playing rock and roll, not inventing a prototype for heavy sounds from the fringes of society.  Expectations, therefore, may have gone unfulfilled for some fans.  And two, these guys aren’t in their 20s anymore.  That’s not a slight, but a truth.  They grew up, lived and lost, and learned how to be better musicians.  It’s really impossible for them to forget how to play guitar well or how to compose lyrics that actually tell a story you can follow.  So those enamored of the brash, undisciplined force we’ve come to love may not be able to draw a straight line between this and the Dolls of the ‘70s.  It’s usually impossible for something to catch fire in the same way twice.  This record’s massive bonfire is, unfortunately, dwarfed by the inferno generated by the band the first time around.  If you don’t try to compare the two, you’ll be able to enjoy each version of the group for its own merits.  There’s plenty here to set this apart from anything we’d come to associate with the name “New York Dolls”, and it’s all excellent.