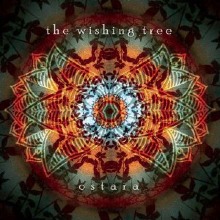 Early 2010 saw the U.S. release of Marillion guitarist Steve Rothery’s second record in collaboration with singer Hannah Stobart under the project name The Wishing Tree, Ostara.  The record saw release in Europe a full six months before crossing the Atlantic, which goes to show how Marillion fans in the U.K. greatly outnumber those from America.  Aside from the left-field hit “Kayleigh” in 1985, Marillion remains relatively unknown in The States, unfortunately.  Rothery has long sought another outlet for his talents and The Wishing Tree, first conceived of as an acoustic music project, with Stobart’s seductive voice as its main strength, may prove to crack into a fan base with too short an attention span to grasp the conceptual conjurations heard with Marillion’s pop/prog approach.  Ostara is a disarmingly fascinating album deserving further discussion.

Rothery, very much a team player in Marillion, cuts the team down to two members with The Wishing Tree.  By handling all guitars, basses and keyboards, he’s freed cohort Stobart to layer her vocals in haunting harmonies and left the drumming to Stobart’s husband, Paul Craddick of the American neo-prog combo, Enchant.  All compositions on Ostara are courtesy of Rothery and Stobart working together, however.  Stobart’s training as a journalist allows her to lend the strength of lyrical composition to the project as well.

One of my favorite cuts from Ostara is track 2 on the disc, “Easy.”  Rothery’s strummed minor chords employ only the smallest amount of distortion, while the bass and keyboards conjure a fog of lament as Stobart sings of the loss of innocence.  Her intentionally open-ended words seem to refer to the growing complexity of modern society in comparison to the back-breaking concerns of people living in decades past.  The question arises whether we, as a society, would have chosen the same path of advancement had we known what else would come along for the ride.  That’s only my interpretation, alas, and the lyrics could refer as well to anything which gains unexpected levels of difficulty through the passage of time.  Rothery’s solo slide guitar is a keeper, simple yet supportive of Stobart’s bittersweet voice.

The song “Falling” examines similar lyrical territory, but more from the first person view of someone taking control rather than allowing moments to exist in a pure form.  Rothery uses an acoustic guitar to provide the backdrop this time, soloing and filling delicately with his electric guitar before dropping a heavily phased gem at the song’s close.  “Fly,” by contrast, sings of the making of a moment to erase or escape an unpalatable fate.  The pace is slower here and sets a structure for Rothery to ply delicate trills and showcase a truly Clapton-esque solo.  Stobart’s range is exhibited in her multi-octave harmonies.  She is Alanis Morissette with rounded edges.

“Soldier” is another standout track, with its baroque classical guitar and keyboard approximations of woodwinds.  Stobart’s voice is framed squarely as she deftly rises and falls through her register.  The lyrics question how a man will relate to his woman and whether he would step outside his life’s role to support her as she needs him to.  It’s not really a love song, but more an inquest into whether the man truly understands what love means.  There’s no rock and roll to be found here as elsewhere on the record due to the absence of drummer Craddick from the track.  It remains the record’s most elegant moment for that loss, however.

The disc closes with live versions of both “Fly” and the CD’s title track, which are actually quite superior to the studio versions.  The live mix is outstanding and Rothery’s solo on “Fly” is more emotional as it rides above a splendid, whirring organ.  Live appearances by The Wishing Tree are rare and proven to be that much more special by these bonus cuts.

Side projects are usually only vehicles for artists to work out ideas that don’t quite gel with their day gigs.  On certain occasions, however, the material and collaborators allow the artist to produce music that easily stands alongside that produced by the ensembles for which they’re better known.  Such is the case with Ostara, one of the most enjoyable titles that I’ve come across in recent months.  As blasphemous as it sounds, I actually hope that Marillion has more downtime in the years to come and that Rothery again finds time to work with Stobart under a very fruitful Wishing Tree.