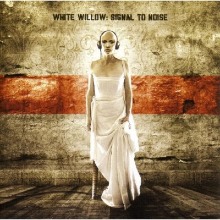 Norwegian art-rock group White Willow takes its name from the tree whose bark contains salicin, from which may be derived the chemical salicylic acid, or aspirin.  While White Willow may not produce the perfect cure for a headache, they are responsible for some of the most original, progressive music that I’ve recently encountered.  My discovery of White Willow comes late in the band’s history with their 5th studio album, Signal To Noise, and their first with singer Trude Eidtang.  The band’s prime mover, however, is guitarist Jacob Holm-Lupo, the author of most of the CD’s lyrics and music.  I’m not sure how Signal To Noise stands up to the rest of the band’s catalog (most of which can be found on the excellent prog-rock label Laser’s Edge Records), but as an introduction, it’s worked quite well to pique my curiosity towards their other releases.

The CD opens with the track “Night Surf,” a slowly building power rocker centered on Eidtang’s angelic voice and a bubbling synthesizer line programmed by keyboardist Lars Fredrick Frøslie.  Each member of the band has a chance to shine, including woodwind player Ketil Einarsen (on mournful flute), bassist Marthe Berger Walthinsen (whose guide line for Eidtang’s voice is featured high in the mix) and percussionist Aage Moltke Schou.  Holm-Lupo is obviously a fan of Rush, and his background fills nod enthusiastically in the direction of Alex Lifeson.  Yet Eidtang is the star of this piece, with a vocal presence that shifts intentionally from a whispery intro to stinging harmonies on the chorus.

The follow-up, “Splinters,” at over 8 ½ minutes begins with Holm-Lupo’s feedback dropping down to a lead line comparable in sound to Marillion’s Steve Rothery or Genesis’ Mike Rutherford.  He’s later providing a heavy metal, crunchy contrast to Eidtang’s shimmering pop.  Frøslie’s synth is the ever-present atmosphere holding the song together as Eidtang sings of Evie, a woman stepping gingerly through the wreckage of her shattered world.

The instrumental “Ghosts” picks up the pieces as Holm-Lupo propels the combo through an odd mechano-Arabic tune with rapidly changing time signatures.  Frøslie contributes the spook factor with an intangible solo leading into Holm-Lupo’s violent turn and back out again with a repetitive machine precision.

Toward the disc’s end, “Dusk City” features Walthinsen in conjunction with Holm-Lupo’s heavy effects before giving way to another star turn from Eidtang, tribal drumming from Schou, and a manic flute solo from Einarsen.  As Eidtang takes the song down to a quiet close, we’re left with the brief, but amazing instrumental, “Ararat.”  Here Holm-Lupo reverts to his Arabic mode with a darkly swirling synthesizer as his lone accompaniment.  His playing here is spellbinding and deserving of more than the minute and a half devoted to the song.

Signal To Noise is notable for leaning closer to art rock than prog and for using the brightly glowing talents of Eidtang to set the contrast to the numerous male voices at the front of so many bands with similar approaches.  With striking cover art from Killustrations and co-production courtesy of semi-legendary European metal figure Tommy Hansen, the entire package is a refreshing alternative to the concept-heavy, sci-fi experiments presented by the marching army of European prog rock clones who think they’re on to something new.  If I get a chance to explore White Willow’s back catalog, I’ll be sure to report what I find there as well.  I’m already certain that there’s more than pain relief in the bargain.