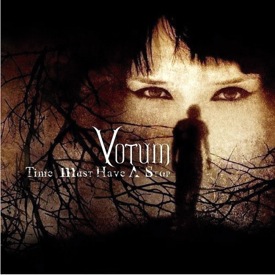 Time Must Have A Stop is the debut CD from Polish prog-rock band Votum released through Progrock/SPV Records. Although the band has received some notice from various American and European metal publications, it’s very difficult to think of Votum’s music as purely metal.  True, guitarists Alek Salamonik and Adam Kaczmarek have a tendency to veer into a crunchier sound when given the opportunity and vocalist/lyricist Maciej Kosinski can sound a bit like Queensryche’s Geoff Tate, but Votum is aiming for variance of their sound on this record.  Keyboardist Zbigniew Szatkowski adds another dimension to the band’s music that prevents them from completely crossing over into metallic terrain. One good example of this is found on the track “The Pun.” Without Szatkowski’s influence, this would be one of the best tunes you’d never heard by the Scorpions (and I love the Scorpions’ work from the early ’80s on back).  The guitarists and rhythm section of bassist Bartek Turkowski and drummer Adam Lukaszek are constantly pushing to turn the song into a balls-out head-banging workout, but Szatkowski denies them.  Kosinski’s voice is all over the map like a young Klaus Meine’s. But on the disc’s third track,“Passing Scars,” Kosinski is also now pulling the band back away from the metal. The keyboards are adding sounds reminiscent of a string section and Kosinski’s voice is heavily altered by a variety of effects. Is it heavy? Yes. Is it metal? No.

The art design for the CD booklet is rather beautiful and makes me long for the heyday of vinyl.  Similarly, the lyrics are far more poetic than most anything else I’ve heard these days. For instance, the symbolism of the train on the song “Train Back Home” is something that’s seldom used with most hard rock bands and never used in combination with such lovely vocals to the effect gained by Votum. In addition, the 6/8 time signature used on “The Hunt Is On” will occasionally be heard on metal songs to give a galloping, driving feel to the piece.  Kosinski does sound like he’s singing at the other end of a long tunnel (another good metal trick), but the guitar strum at the beginning of the song and the breakdown in the middle reminds us more of Rush (not metal!) than Pantera (absolutely metal!).

But…then…comes…”Look At Me Now.” Kosinski is using an occasional bark, but never for more than a syllable. The guitars and drums sure want us to think this is a metal song, but there’s a section in the center where the music sounds more like a trip to another dimension and Kosinski is singing some sort of Eastern-influenced melody complete with high register harmonies.  OK, guys. You stumped me. Are you a metal band, or what? Well, whatever you call your music, it’s smart, artistic and contains very solid performances.

Votum’s biggest challenge will be in cracking into the American market and that’s only because Warsaw is a long way from Los Angeles. But anyone that enjoys a heavy end to their prog rock will definitely become a fan once they’ve heard Time Must Have A Stop.

One thought on “Votum – “Time Must Have A Stop””