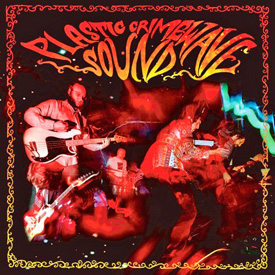 Somewhere shy of the live feedback outbursts of Quicksilver Messenger Service and The Grateful Dead, yet heavier, more demented and sludgier than The MC5 or The Stooges, lays Chicago’s Plastic Crimewave Sound.  Named after their vocalist, Plastic Crimewave, the crew draws from ’60’s garage punk psychedelia, the stoned-out desert mirages of Kyuss and Fu Manchu, the mid-80s thunder of Volcanosuns, the “Who gives a fuck if it’s been done before?” attitude of Roky and the 13th Floor Elevators and the polar opposites of Pink Floyd’s “Careful With That Axe, Eugene” and “The Nile Song.”

On their 2008 self-titled debut, Crimewave gives Ogre from Skinny Puppy a run for his money when employing his voice as a tool to inspire fear.  Obviously influenced by creepy, low-budget psychedelic horror films of the ’60s and ’70s, Crimewave isn’t afraid to rhyme “Planet Crushing” with “Peter Cushing,” and that does take some guts.  Many other chances are taken when Nick D’Vyne (credited with “Hot Lead Guitar”) opts to veer completely off-key on an explosive freak-out of a solo whenever possible.  The rhythm section of bassist Lux and drummer Skog Device maintains a constant rumbling beneath the oil projector spin and strobe light flash of the two guitarists.

With titles such as “(I Am) Planet Crushing,” “Dead Island Boogie,” “Shockwave Rider” and “Punched In The Face,” you have a pretty good idea of what sort of amped-up mayhem PCS is singing about.  The big exception is on the disc’s closer, the 17-plus minute “The Pasture.”  We’re ending with a loosely structured raga drone of feedback that’s altogether different from the thudding and croaking that we’d heard earlier.  PCS has already issued the follow-up to Plastic Crimewave Sound.  It’ll be interesting to see what other chemically charged influences the quartet references in the years to come.