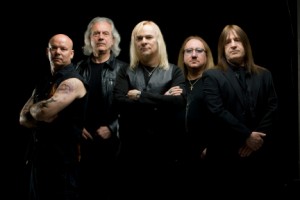 After an almost impossibly long break of ten years between studio releases, Uriah Heep have finally returned, not to fantasy, but to their rock roots with a new record titled Wake The Sleeper. Uriah Heep circa 2008 are: guitarist Mick Box, bassist Trevor Bolder, keyboardist Phil Lanzon, vocalist Bernie Shaw and newest band member, drummer Russell Gilbrook. Aided by producer Mike Paxman and a back-to-basics approach – no synthesizers, multiple overdubs or other frillery – Heep have recaptured the magic and energy that pervaded albums such as Look At Yourself and The Magician’s Birthday.

From the first note of the opening “Wake The Sleeper,” there’s no doubt that Heep are going for the jugular. The title track comes thundering out, with a massive backbeat courtesy of new Heep drummer Gilbrook and a driving Box riff with some wild wah-wah guitar. It’s an instant classic. Quick on its heels comes “Overload,” another hard-rocking track with the second great riff of the record. Lanzon adds a colorful wall of sound at the end, painting an audible canvas with Hammond swatches and swirls. Track three, “Tears Of The World,” brings forth yet another killer guitar riff – scoring the first hat trick of the album.

“Heaven’s Rain” is a broad, noble rocker with space for Shaw to show off his pipes. Box also unleashes a short, melodic solo that complements the tune perfectly. “Book Of Lies” makes effective use of a twin guitar and organ attack with a lovely chorus, another gem of a solo from Box and some cool, bubbling bass from Bolder. “What Kind Of God” is something of a departure, a retelling of the Native Americans’ struggle against the encroachment of settlers from overseas. The song has a military, march-like quality, as Gilbrook rolls out a cadence and Lanzon’s keyboards trill in the background. Box enters near the end with an awesome, darkly tinged wah-wah solo – another album highlight. “Ghost Of The Ocean” is a huge-sounding rocker, a tune that should translate into a superb live number. Speaking of which, Heep have decided to play Wake The Sleeper in its entirety during each show in the band’s current 18-month tour. As Box wrote from the tour bus from Saarbrucken, Germany, “Well we have played four shows now, and the set list is really beginning to bed in now. You probably know by now we are not playing it safe and we are performing the whole of the WTS CD plus some of the classic Heep songs. This is a very brave move but we had to give it a go as we had been playing the last set for quite some time. It was time to stand up and be counted.

“The set has been very well received so far, and the response each night has been wonderful, very warm and very heartfelt. I am sure the people who come to the show can see the effort we have made to get this set of songs as powerful as we can and with a nice balance between the old and new songs. We have even introduced the original intro to “Gypsy,” which is going down a storm each night and sounds super powerful.

“We have been getting on very well with Thin Lizzy, and these German shows are a rock night extravaganza for the fans and one they will never forget… The set is very demanding and very rewarding at the same time. I will be interested to read the reviews as they surface. They certainly cannot deny the fact that we have been brave and not taken the easy option as some bands do and just play a couple of new songs amongst the hits and the classics. The backdrop when we can get the whole thing up looks tremendous and helps give a freshness to how the stage looks and having merchandising is a real plus too. We even have a [concert] programme, which we have not had for at least 20 years.

“This is a very exciting phase of our career and there is a genuine buzz and excitement surrounding us at the moment which is very uplifting. We look forward to seeing you all out on the road and a big thanks to all of you that have bought WTS and merchandising so far as we do appreciate your support.”

Now, back to the record…

“Angels Walk With You” is an atmospheric winner from the pen of Bolder, with an angular guitar line, sweeping organ chords and great cymbal work from Gilbrook. “Shadow” is a timeless Heep number that could have been written in 1973, sounding at the end, almost like a variation on the cataclysmic close of “Pilgrim,” from Sweet Freedom. “War Child” caps the disc with one of the strongest Shaw vocals of his career, and ices a very sweet cake indeed.

Ten years is a long time between records, too long. Let’s hope that Heep can get back in the studio as soon as they want. We’ll be waiting.

(Read more about Heep in my interview with Mick Box.)