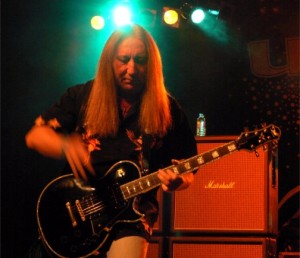 It’s been 10 years since you released your last studio album. What took so long for Wake The Sleeper to come out?

Mick Box: We released a CD in 1998 called Sonic Origami, which was loved by the fans, the press and the record company themselves. However, we had a world tour booked and the record company did not support the CD as they said they would. We decided not to give them another one. We got out of the contract and then the record industry went in to free fall. The record industry attacked the Internet (Napster), and then realized that there were thousands of free download opportunities so they had to re- invent themselves and embrace the Internet.

As part of that reinvention, record companies disappeared, amalgamated, or got smaller, and many people lost their jobs. In all of this turmoil, we could not find a home. When we did it was with Sanctuary Records U.K., who owned our back catalog. We recorded Wake The Sleeper and gave them the final masters, only to be told that they had been taken over by Universal. This left us in limbo for the best part of a year and it was a frustrating time for the fans and the band, but luckily, on hearing the CD, Universal decided they wanted to release it. It just goes to show that there is nothing certain about the record industry anymore.

Was there a particular sound or vibe you were going for with this album?

Yes! We did not want to use synths – only the Hammond organ, bass, drums and guitar. We also wanted to go into one room and play the songs as a band and not do it piecemeal. We found a studio in Lincolnshire in the countryside that was called The Chapel. It had the perfect vibe. We rehearsed everything to where the producer Mike Paxman and the band were happy, and then we pressed the record button. And within three takes, we usually had it in the bag.

Mike Paxman was in the room with you while the band played?

Yeah. He just wanted to be in the vibe of it all. In rehearsals, he was bouncing off the walls. When we got into the studio, the last thing he wanted was to sit in an armchair and listen to it come through a few small speakers, you know. So he came in and put some headphones on and just got in the vibe of it. It was great, seeing him in there. And you really warm to people like that, when they’re that involved when you’re doing your music.

This is the first Heep record in many years that doesn’t feature Lee Kerslake on drums, due to some health problems. Was it strange recording without him?

It was strange not having Lee around after all of these years, and that applies to being on stage, too. However, Russell is very powerful and professional, and he fits in extremely well both on a musical level and a personal level.

How did you choose Russell Gilbrook to replace Lee, and how would you describe his style? Are there plans for Lee to rejoin?

There are no plans for Lee to join. Russell rang Trevor to give him his new mobile number at the time we were doing auditions. Trevor said, “Phone Mick and see if you can come down.” We did not want to find a Lee clone, as that would have been wrong. We wanted someone who had their own identity, and after a few days of very frustrating auditions Russell came along and made the drum stool his. We gave everyone three songs to learn instrumentally and vocally – “Between Two Worlds,” “Easy Livin’” and “July Morning.” Most people were unprepared, and they could not even sing even when they said they could. Russell came in and he had rehearsed five songs that, to be quite honest, we could have taken out on the road right there and then. He really lifted the room.

Along with some killer riffs, this album has some really nice melodic soloing. I don’t think that part of your playing gets enough credit.

As far as solos are concerned, they should be an extension of the song but within the context of the song, as well. It’s very important to come in with a bit of impact, have something interesting to say in the middle and then have a climax. That’s how I treat every solo. I find that a lot of guitarists of today, if you like, when they get a chance to solo, it’s like a piece for them. [laughs] And half the time it has nothing to do with the song. It just drizzles out. It’s just drizzle. What’s the point? You need some shape and structure, but that’s old school, isn’t it? [laughs]

The best guitar solos are those you can sing along with.

Wake The Sleeper is also being issued on vinyl. Was that a band or label decision?

It is a band decision, but Universal were very supportive with this idea.

How did Ioannis come to do the cover art? What input did the band members have on the design?

A guy named Jeb Wright from an Internet site called Classic Rock Revisited suggested him right at the same time I read an interview of Ioannis in Record Collector magazine. He was asked if there was any band he would like to work with and he answered Uriah Heep. So, with that coincidence too strong to deny, I got in touch with him. He was true to his word and has produced a very strong cover for us.

I’d like to throw out a deep track from the Heep catalog. “Weep In Silence” has always been one of my favorite tunes.

“Weep In Silence” is actually a good song, off High And Mighty you’re talking. High And Mighty, in essence, I didn’t get on well with the album. I can hear it now and appreciate it, but at the time I was hoping it would be a bit more rocking. It was a bit low-key for me, but we decided it would be one of the standout tracks. And an amazing Ken [Hensley} solo on that one. He plays very well on that one.

How about a deep track from your side?

“Salisbury?” You know, back in the old days, we actually did “Salisbury” without the orchestration, and it worked very, very well. It was still powerful, and I think that spoke volumes about the song itself. Some of the passages – even though we had the brass [arrangements] stripped out of it – it still stood up on its own. And I think that’s been a bit of a dark horse. A lot of people, over the years, have come up and told me that Salisbury is one of their favorite albums. It has a lovely innocence about it. It’s got a jazzy feeling. There’s a lot of lovely bits in there. I heard it recently, by default [laughs] – cause I never listen to my own stuff – and I was thinking, “This is really driving. It’s great.” And I really enjoyed the energy on it. Loved it.

How would you compare Heep now, with the group 30 years ago?

A very difficult question as the world was a different place back then. I have been blessed that I am still doing this 38 years on, and I have the same passion for it as I had when i was 18, so ‘appy days!

Special thanks to Uriah Heep Web master Dave White for the photo of Mick. You rock Dave!