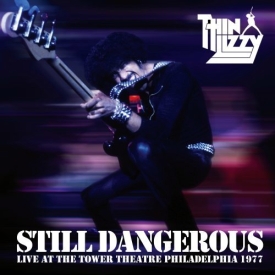 Thin Lizzy’s Still Dangerous: Live At The Tower Theatre Philadelphia 1977 is a thrilling live account of the final days of Lizzy sporting the twin-guitar attack of Brian Robertson and Scott Gorham, along with Phil Lynott, of course, and drummer Brian Downey. The tapes from the show sat dormant for more than 30 years, and have since been remixed and remastered by Glyn Johns.

The good – and it’s very good – is the band itself. The performances are smoking hot, and the energy that runs through every song makes your hair stand on end. The twin guitar harmonies on “Soldier Of Fortune” are phenomenal – beautiful and haunting. I love how Robertson and Gorham emulate the sound of pipes with their dual descending lines. And as the band members hold the last chord of “Soldier,” there’s a palpable sense of urgency… just as they fire into “Jailbreak.” When the sirens wail, signaling the breakout, the Tower Theatre must have been one amazing place to be. And the music just doesn’t let up. “Cowboy Song” goes right into “Boys Are Back In Town,” taken at a frenetic pace and a version that must be heard even if you’ve listened to the tune 1,000 times before. Still, the best is yet to come as Lizzy unleash a blistering version of “Massacre,” from the then-recent Bad Reputation album. Lynott’s voice is commanding and soars as he sings, “There goes the bandolero…”

The bad? Well, the disc is rather short, with 10 songs clocking in just above the 40-minute mark. Should that detract you? I hope not. Back in the pre-compact disc era, this would be a fully fleshed out long player. Now it seems akin to an EP. Still, you’d be remiss to miss this performance that in parts equals or betters Lizzy’s legendary Live And Dangerous album. It’s one amazing record complementing another.