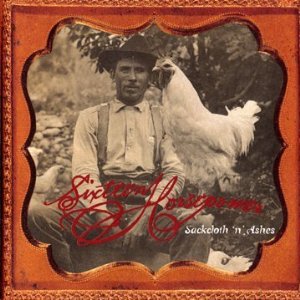 I’ve recently purchased a CD originally released in 1996 on A&M Records by a band from Denver, Colorado, – Sixteen Horsepower’s Sackcloth ‘n’ Ashes.  I’d only ever heard one song by the band, but it’s stayed stuck in my brain since I’d first heard it.  From what I’d read of the group, the rest of their songs also followed along the same lines of “Gothic Americana” presented with their biggest song, “Black Soul Choir.”  Simple, sometimes antique, instruments used by a trio of musicians fronted by a man whose voice bled shards of wasted chances at redemption and whose soul was certainly at least halfway consumed by the hell-fires which he feared so strongly.  There’s a jagged path through the history of popular music where the artists have chilled us with tales of damnation.  Trace it from Johnny Cash, Bob Dylan and Leonard Cohen to The Gun Club and Nick Cave’s Bad Seeds on to Sisters Of Mercy, Mission UK and Fields Of The Nephilim back to Sixteen Horsepower.  The simplified delivery reminds us of the darker moments from The Violent Femmes, yet these songs chill the listener immediately rather than subtly over the songs’ courses.  But what you’ll hear from Sixteen Horsepower is a constant feel of looming, biblical judgment, where the other artists mentioned merely dabbled in these themes for varying periods of time.

So, how’d I do?  Well, I probably wouldn’t be taking the time to write this story if I hadn’t found something that I truly enjoyed.  I usually do a lot of research before taking this kind of leap and I’ve learned to trust my instincts.  Good thing, too.  Sackcloth ‘n’ Ashes is a very powerful album and well worth the extremely low price that I paid to an online retailer for its delivery.  What is most noticeable about the record is the near total dominance by singer and multi-instrumentalist, David Eugene Edwards.  These are his songs and he wrote them from the perspective of the grandson of a Nazarene preacher.  All fire and brimstone, we feel as if he’s just as willing to sing this way at our funerals as he is on record.  His is an overwhelming presence and his mournful, banshee-wail of a voice demands our attention.  His instrumental performances are as commanding, whether delivered by sliding, surfy electric guitar, vigorous banjo, or old-timey, button accordion bandoneon concertina.  His conspirators are jazz-trained drummer Jean-Yves Tola and stand-up and flat-top bassist Kevin Soll.  They bring more than enough to Edwards’ music to help freeze us in our tracks.

Beginning with “I Seen What I Saw” and Edwards on a very ghostly electric guitar, we’re told of him seeing something so very frightening that it terrified both Edwards AND his horse.  We’re never told exactly what he “seen”; was it some unspeakable act by his God-fearing kin, a spirit from the past, or Satan himself?  I suspect that the terrifying object was actually a woman whose movements caused Edwards to fear for the safety of his own salvation following the acts he imagined the woman might “perform” on him if she knew he’d been hiding just out of her range of vision.  The psycho-sexual tension runs high and the light cast upon it shines down as if from a church’s spire.  The song, as with many on the record, represents a synergy where the sum of its parts expands to something far beyond the combination of its individual elements.  Powerful, frightening, wickedly amusing.

The aforementioned “Black Soul Choir” follows and sees Edwards switching to banjo.  The lyrics deal with the moment that judgment actually comes from above and how well-prepared one might be for that day.  Edwards can forgive the sins of his fellow humans, but he’s far harder on himself.  While singing that “every man is evil, every man a liar,” he also expresses a kinship with his fellow sinners.  Yet, if given the opportunity, he’d deal with those falling short of grace as Cain dealt with Abel.  The minor key banjo, the walking bass line, the galloping drums, and the rising chorus of damned souls contribute to an excellently told, yet tragic tale of Hell on Earth within one man’s mind.  “Scrawled In Sap” returns to a similar theme as that on “I Seen,” but this time the relationship has gone further and is even more of a sin.  The “cream white skin” of which Edwards sings belongs to a married woman and he fears for two souls now.

Later on, Edwards uses his powers for good instead of evil on one of the records’ few major key numbers, “Red Neck Reel.”  Driven by both a bright banjo part and some tricky acoustic guitar strumming, it’s really more of an Appalachian dance tune and does a great job at breaking up the tension created by the doom and gloom elsewhere.  But the song is immediately followed by “Prison Shoe Romp,” one of the CD’s darker pieces, made spookier by the pervasive bass line, a rockier drum beat, and Edwards’ jangling, dangling guitar.  “Prison” here is a metaphor for condemnation due to a multitude of transgressions.  Can an escape from prison deliver you from a higher judgment?  Are prisoners somehow lesser people as they’ve now blown their chances with both The Lord and humanity?  Do laws even apply to them anymore?  Are they there because they’ve forsaken the tied bed sheets of The Lord’s salvation?  It’s a furious circle of metaphysics and one of Sixteen Horsepower’s heaviest, punkiest moments.

Perhaps the album’s most powerful and frightening moment comes with the closing song, “Strong Man.”  Featuring solely Edwards’ voice and desolate electric guitar through most of the piece, it’s a call to arms to followers devoted to a perverse, Old Testament decree to bring down all strong men.  It seems their offense has been to seek a path that elevates them above the ranks of humanity.  This also unfortunately causes them to be identified with those that brought Christ down during on his Earthly visit.  It’s a blood-curdling declaration, made more disturbing once the bass and drums kick in following a false ending.  Is Edwards assuming a role?  Is he actually calling for the deaths of everyone that’s unconverted?  Is he the one that decides who dies and who lives?  Sheesh!  It’s enough to cause someone to run screaming from their stereo, but entrancing enough to bring them back to the speakers once the song’s faded out.

Sackcloth ‘n’ Ashes is surely one of the scariest albums to be released in the last half century and it’s made a bit scarier because of the odd choice to use 19th Century instruments in its delivery.  No matter how you imagine America became the nation it is today, you’d be remiss if you ignored the fact that a lot of simple, hard-working, God-fearing people lost their lives just carrying on and were motivated in life through fear of the beyond.  This record may be Sixteen Horsepower’s most “rock” record, but it’s also their most terrifying.  By touching on this element of Americana, they’d managed to create something very unique amidst the derivative, grungy wasteland of the mid-1990s.  If you like straight, four on the floor, rock music, this one isn’t for you.  But if like to get the bejeezus scared out of you on occasion, just to feel the rise in your heartbeat, and you’re not fixated on the standard vocals-guitar-bass-drums-keyboards make-up of a band, give this one a shot.  If your record collection is arranged according to musical genre, I’d like to know if you ended up filing Sackcloth ‘n’ Ashes in a category all its own.