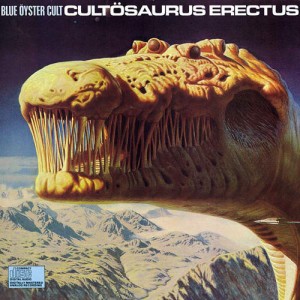 Blue Oyster Cult was never – and has never been – a heavy metal band. For every torch-lit tune such as “Cities In Flame (With Rock and Roll)” and “Godzilla,” there were equal doses of poppy goodness  (“Debbie Denise”), teen rock (“True Confessions”); and other massive radio hits “Burnin’ For You” and “(Don’t Fear) The Reaper” would never be confused as one of the full-frontal offerings of Motorhead, Black Sabbath or even Deep Purple. No matter. Blue Oyster Cult was a band that could – and did – everything. They were Frank Zappa, Hawkwind, Vanilla Fudge, Franki Valli and Robert Heinlein (to name just a few) brought together into an unclassifiable rock band that didn’t sound like anyone else, and vice versa. The great thing about BOC is you never knew what you were going to get, not just from album to album but from song to song, verse to verse. Even better, you usually got more than you expected.

By the late 1970s Blue Oyster Cult sounded like a band struggling to find its identity. The 1978 album, Mirrors, relied heavily on acoustic, pop-like numbers; although, it did spring the Buck Dharma-penned classic, “The Vigil,” many fans of the band’s earlier work, particularly the first three “Black and White” albums, were less than enchanted at the new direction. The next record needed to be heavier, a return to roots. Producer Martin Birch was brought in to dial up BOC’s sinister side, or at least to let the doors of Jurassic Park open. And open they did: Cultosaurus Erectus was the result, and in my mind, it’s the most listenable and complete record Blue Oyster Cult has recorded.

Released in 1980, Cultosaurus Erectus, didn’t make great waves, but it should have. Music aside, the record sports one of the great covers of all time. Artist Richard Clifton-Dey’s painting was embellished with a small rocket ship bearing the BOC logo flying past the giant Erectus, but that’s not what draws attention. It’s the hulking head of the many-eyed fictional beast and its mouth whose cage-like “teeth” seem to have no beginning or end. Compared to the very forgettable album art for Mirrors, this seems to be a new day. (And the follow-up Fire Of Unknown Origin would also sport very different but equally magnificent artwork.)

With heavy metal master Birch producing the band for the first time, there was a conscious effort to get back to harder rock roots. And those roots are exposed from the first needle drop (or laser read if you prefer). The science fiction epic “Black Blade” is among the best of BOC’s output, with a terrific use of guitars and keyboards and voice effects to create an audio short story of an evil sword that knows no master. “Monsters” features an appropriately squiggly guitar line and like many of the songs here, it takes a detour into unexpected territory when a half-time blues meets saxophone in a Vegas-style lounge jazz break. Buck Dharma’s “Divine Wind” is a slow, spacey number with a guitar part reminiscent of Robin Trower, but Eric Bloom’s vocal (“If he really thinks we’re the devil, let’s send him to hell!”) delivered squarely at the then Ayatollah Khomeini is pure BOC. Joe Bouchard’s husky singing on “Fallen Angel” sounds very much like Queen’s Roger Taylor, and like Taylor’s tunes this one rocks out. The bombast of stadium rock, rock stardom and the quest to score with a girl are brought together to perfection in the mini-epic “The Marshall Plan.” This tune has it all: big production, the vibe of the early ‘80s, plenty of power chording and just enough cheesiness (thanks Don Kirshner) to round it out. It’s BOC doing everything they do so well. And yes, I love the irresistible pop nugget “Hungry Boys,” a keyboard-driven cross between The Cars, The Feelies and Gary Numan.

When I listen to the band’s early albums, I always get the feeling that this group could do anything they wanted musically and conceptually and pull it off. It didn’t always happen, but here it does. Blue Oyster Cult wouldn’t truly take the public eye for another year until the follow-up, Fire Of Unknown Origin, but in this music lover’s ears Cultosaurus Erectus remains the band’s finest moment.  Who’s with me?

(If you love this album as much as I do, you’ll want to check out my friend Martin Popoff’s exhaustive essay in one of his fine Ye Old Metal reviews.)