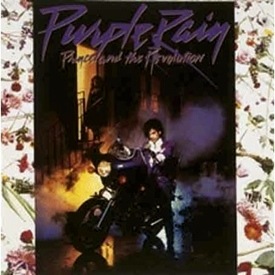 A notable release in Rhino Records’ vinyl reissue series is an album that is considered one of the best recordings of all time – Prince and The Revolution’s Purple Rain.  While it’s hard to comment on a record that’s sold more 20 million copies worldwide and not sound redundant, it must be said that 1984’s Purple Rain should only be heard on a high quality vinyl copy such as this in order to experience the rich, full sound contained within.  Rhino’s reputation of paying close attention to detail when honoring both the artists and their audience is especially evident on this version.

Following the faux-preacher’s “Dearly beloved…” sermon at the album’s open, Prince took a left turn that surprised anyone familiar with the electro-funk sexy coldness of his back catalog.  On “Let’s Go Crazy,” he demonstrated that he was not only a multi-instrumentalist, but an absolute master of the electric guitar.  By punching up the power chords and dazzling the listener with one of the most amazing solos ever committed to tape, Prince reached out beyond his core fan-base to pull in even the most unapproachable metal heads.  Purple Rain is full of experiments such as this and marks Prince’s biggest success in moving the masses.  While the title track remains one of the best known ballads ever sung, “The Beautiful Ones” is another fantastic tune with a slower pace that highlights Prince’s powerful falsetto.  “Computer Blue,” with its lesbian bath-time tease of an opening kicks off a small segment of what was conceived as a much larger suite.  Throughout the course of the song, Prince demonstrates the lower register of his vocal range, one of his best screams and blinding, fuzzed-out distortion on the guitar fills.  The notorious “Darling Nikki” closes side one.  Although there have been songs with racier content, there had never been a song dealing with female masturbation and a lay-you-then-leave-you ending that was part of a #1 album and motion picture.  He unknowingly triggered a reaction from overprotective Senator’s wives that still leaves the scar of a Parental Advisory sticker on beautiful album cover artwork to this day.

Side two begins with the song that may be the biggest reason for owning this release on vinyl.  “When Doves Cry,” a tune on which the bass line was removed to enhance the ethereal nature of the lyrics, requires playback from a source where the depth of the sound is felt more than heard.  This is tough to do using the relative lack of warmth found in most CD players.  Vinyl is the answer — Prince knew that and so does Rhino.  The danceable medley of “I Would Die For U” and “Baby I’m A Star” fills the center of the side and kept Prince a fixture in his primary base of club music and R&B fans.  That leaves us with the album’s namesake, a lengthy ballad using strings, piano, more guitar and a completely unforgettable hook in the chorus.  There’s no estimating the number of slow dances done to that particular song during the ’80s and beyond.

Purple Rain is Prince’s masterpiece and the point at which he was beginning to make better use of the exceptional touring musicians that he had by his side.  Most of us already own this record and some of us have beaten vinyl versions in our collections.  While Prince is enjoying a noted resurgence in popularity in recent years and a greater appreciation for his stylistic genius, you should consider whether you need to have this historic recording, or a better copy of the record, as a part of your collection.  Don’t shop the rummage sales or flea markets for a used copy.  Get smart, lay down some real money, and buy Rhino’s reissue.  You’ll want to invest properly in a record that you love 25 years later and will still love 25 years from now.