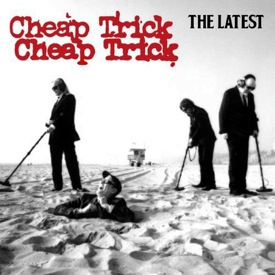 In 2006 Cheap Trick released Rockford, and for me it was the year’s biggest musical surprise. Here was a complete collection of brilliant pop and rock songs that fans had been waiting for since Dream Police. Subsequent records hinted of the band’s capabilities, but the results seemed to fall short of potential. Then as 30-year music vets, they didn’t just come back knocking on the door with Rockford, they kicked it down, square. It was a remarkable comeback, but could they carry through again?

The Latest is, well, the latest Cheap Trick album – 13 tracks of original material that soar with hooks. It’s hard to overstate how good this record is. Every Cheap Trick strength rises to the surface, whether on the ’50’s-ish rock shuffle of “When The Lights Are Out,” the buzz-saw attack of “Sick Man Of Europe” or the dazzling Lennon-esque-pop of “Miracle,” the music unfolds, song by song, into glorious curtains of sound. “These Days” is a vocal harmony tour de force, driven home with a subtle yet thundering Tom Petersson bass line. “Everyday You Make Me Crazy” is a short, punchy rocker that could have come off Heaven Tonight; as could “California Girl,” a rollicking ride through Little Richard’s backyard with Bun E. Carlos laying down a monster beat.

Robin Zander has never sung better. While many of his contemporaries are drying up and losing range, Zander just gets stronger. From tender to street-tough, Zander is one of rock’s most versatile singers, and his performances here are among the best in a very good career. Check out his delicate delivery on the opening lullaby “Sleep Forever,” or “Miss Tomorrow,” where Zander’s subtle twang sounds like Dwight Yoakam fronting ELO.

Let us not forget Rick Nielsen, the songwriting and arranging wiz behind so many classic Trick tunes. His stamp is all over The Latest, and his gift for pure melody is spread across every song. Nobody writes tunes like “Everybody Knows” or “Alive” except Nielsen. I only hope that he saved something for later.

Cheap Trick got back – way back – in the game with Rockford; with The Latest, they are the game.