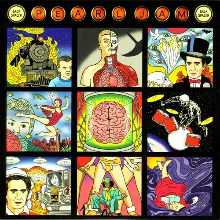 Before I begin this review, let us please dispense with the term “grunge” as a way to describe music and stuff it aside as a word for the resinous build-up inside of a weed smoker’s bong.  “Grunge” has always been a media creation for lazy journalists to lump the music of all bands from Seattle into one faceless category.  Can you say that Tad, Soundgarden, Nirvana, Pearl Jam and Screaming Trees have any sonic similarity aside from the fact that they like their guitars up loud in the mix?  If you can, please go read an Adam Lambert review elsewhere and let the serious music fans enjoy this website on their own.

Now that I’ve shaken the wheat from the chaff, let’s talk about one of the best rock and roll records to see the light of day in 2009.  Pearl Jam’s Backspacer, their ninth studio release in nearly 20 years as a band, sees the band stripping away all of their experimental trappings to focus on songs that will blow their fans away in a live setting.  If your only exposure to PJ has been “Alive,” “Jeremy” or “Even Flow,” all from their 1991 debut record, my friend, you’ve been missing out on some of the best rock music recorded in the last two decades.  I won’t make the case for everything they’ve done between then and now.  You’ll have to play “catch-up” on your own time.  Instead, let’s concentrate on what the band is up to nowadays and talk about why Backspacer is, contrary to what many of their other devoted fans might say, their best record to date.

First off, the band is reunited with producer Brendan O’Brien, a man who’s made his name elsewhere, but is responsible for encouraging PJ’s muse on their releases Vs., No Code and Yield.  On each of the band’s releases that O’Brien has been involved in the band has approached the studio with a fully conceived collection of songs that merely required that he capture the ideas and expand on them with additional keyboards and string arrangements.  Pearl Jam is, after all, a band that both relishes their companionship and is able to riff off each other’s ideas unlike the vast majority of combos that have recorded together through the ages.  In most bands there are one or two designated leaders that present the concepts and expect their fellows to follow suit with their performances.  Much has been made of singer Eddie Vedder’s unique voice and critics have tried to say that Pearl Jam is his show alone.  This is markedly untrue.  On Backspacer the band has relinquished the lyric writing duties to Vedder alone, but as on each album they’ve released, the band takes turns at creating the music behind the words Vedder is singing.

Additionally, the band has approached the concept of Backspacer differently than they have with other records.  This is the first release that they’ve controlled independently of a major record label.  You can purchase Backspacer at Target stores only, in a move similar to that with the Eagles’ and AC/DC’s latest records which were only available through Wal-Mart and Sam’s Club outlets.  This assures (and displays a trust from Target that the product is saleable) that the band is not hampered by any expectations from outside forces to produce a record that meets market necessities for airplay and unit sales.  That being said, the record will be heard by Pearl Jam’s loyal followers through conventional outlets online and in a live setting and will still sell millions of copies.  Thus unfettered, and with a trusted compadre in the booth, Pearl Jam set out to make a record that satisfies themselves and their legion of fans worldwide.

“What’s so different about Backspacer that you say it’s their best album?”  I hear you.  That’s a mighty weighty statement, isn’t it?  The deal with Pearl Jam is that they are music lovers, constantly drawing from an incredible array of sources for their inspiration.  From punk, to classic rock, to metal, to oldies, to folk influences, Pearl Jam has often surprised us with what’s ended up on their recordings.  The main juice coursing through their veins on Backspacer is power pop- and new wave-derived.  This isn’t unusual for them, but it is remarkable that the same feeling follows them all the way through the entire album.  I’m not talking about synthy, dancey, new wave, I’m talking about when bands were coming up with new ways to blend guitar sounds into their music that didn’t involve overdriven feedback and blinding, 10-minute solos.  Ideas are concise with eleven songs coming through in just over 36 minutes.  We used to like when bands got up to the mic, made their points quickly, and got right to the next song.  Pearl Jam hearkens back to that time and does a damn fine job at it.

A few examples of what I’m talking about:

Track two “Got Some” (music written by bassist Jeff Ament) has this peekaboo, echoing guitar line behind the verses that is so atypical of lead axe slinger Mike McCready.  This is a guy that regularly drops bits of Jimi Hendrix, KISS, Led Zeppelin and Van Halen into his live solos and here he is referencing Television or the Talking Heads.  Matt Cameron’s super-jittery drumming is incredible!  He’s wafting back and forth between surf punk, across-the-kit fills, cocktail lounge hi-hat and accented rim shots.  True, the choruses and the song’s close build in intensity, but it feels more like something from The Knack than Black Sabbath.

Track three, “The Fixer,” is nearly a full-band composition with Cameron, McCready, and guitarist Stone Gossard writing the music.  From Vedder’s “yeah-yay-yeah” and “ah-ah-ah” vocal fillers to McCready’s nod to R.E.M.-style jangle pop on the bridge to the barely perceptible organ rounding out the edges in the background, this song is as straight-forward a pop rock song as PJ has ever delivered.  Vedder’s repeated “fight to get it back again” line emphasizes an optimistic desire to mend rather than a condemnation of an irreparable situation.

Track four “Johnny Guitar” is Vedder’s paranoid dream about Johnny “Guitar” Watson macking on his woman.  No kidding; that’s what the song is about.  Cameron and Gossard team up to write the music here on this brief but fun rocker.  Gossard’s  fuzzed out  and chicken pecking guitar bits leading into and out of the chorus and Cameron’s assured flailing serve as the set-up to the dominant McCready power chords.  Surreal yet brilliant!

Track six “Amongst The Waves” is easily one of the top three songs Pearl Jam has ever recorded.  The Gossard-penned chord changes in combination with Vedder’s lyrics of overcoming adversity do much more to exemplify the uni-mind of this band than anything I will write here.  Gossard and Vedder’s muscular rhythm lines beneath a dazzling McCready solo and the soaring organ accompaniment make for something that’s pure positive emotion rather than mere music.

Track seven “Unthought Known” with a Soundgarden-esque title is Eddie Vedder with Pete Townshend whispering over his shoulder.  A simple eighth note guitar strum begins a slow build that eventually accommodates pounding piano and thunderous drumming.  The lyrics indirectly question the existence of that which cannot be sensed.  This is an example of Eddie’s best songcraft and most impassioned vocals.

Track eight “Supersonic” is something more akin to what Gossard usually delivers with punky propulsion, harmony vocals and a sludged-out breakdown that gives McCready room to stretch out.  The chord progression and buzzsaw rhythm remind me of the Gossard-sung “Mankind” from No Code, but more like that song was the warm-up to what was actually done on this one.  All that in two minutes and forty seconds!  Great bands don’t need more than that to get their message across.

Complete with demented sleeve artwork from cartoonist Tom Tomorrow, Backspacer is a blast from start to finish.  It’s the perfect example of what a band can accomplish when they concentrate only on having a great time hanging out and letting the ideas flow.  It’s also a bow to the band’s supporters throughout their career rather than a recruitment drive.  In the process, they’re likely to pull in more true believers amongst open minded music fans, even though that clearly is not the band’s intent.  Preaching to the choir?  Perhaps.  But, ah, what hymns they create!