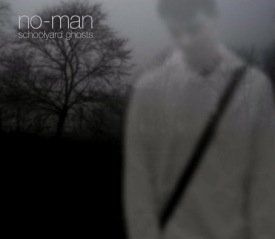 No-Man’s sixth studio release, Schoolyard Ghosts, is as much a revelation for fans of No-Man’s previous work as it is for fans of the duo’s guitarist, Steven Wilson.  Wilson, who started the No-Man project with vocalist Tim Bowness at more or less the same time that he began his better known group Porcupine Tree, in 1987, has been lauded as a prolific everyman, yet he reins in his prog-rock tendencies on a release that is beautifully subdued and shrouded in mist.  Bowness’ voice is a haunting whisper on “Ghosts” and is best served by textures and treatments rather than cacophony.  Gone are the days of No-Man’s trip-hop and indie rock past.  The future consists of airy lamentation with nary a beat to push us forward.

The term “ambient” also no longer fits what No-Man creates, at least in the sense of it being a danceable cool down.  There’s a sensibility here that may not be grasped by all at first exposure.  Thus, Bowness and Wilson chose their collaborators carefully.  The work has become more orchestral with its use of string arrangements, mellotron, harmonium, and even pedal steel guitar courtesy of former American Music Club member Bruce Kaphan.  The exception to the rule of Ghosts can be found within a brief thrashing section on the cut “Pigeon Drummer.”  Former King Crimson percussionist Pat Mastelotto delivers the necessary bombast while dropping back to chimes and other melodic devices elsewhere in the song.  He’s also responsible for a beat-less rhythm on the piece “Song Of The Surf.”  Wilson’s chords, keyboards and harp swell much like ocean waves along to Bowness’ sad song to the sea.

Throughout the record, Bowness’ words roll as poetry designed to inspire meditation.  He’s intending to describe a scene without negative or positive value associated.  Wilson likewise paints pictures using strings as brushes.  The mood subtly set by key and calm works better to guide our emotions than any syllables crafted to tell us how to feel.  An optimistic glimpse lies within the lyrics to the disc’s lead cut “All Sweet Things.”  Amid descriptions of barren locations and stark humanity, Bowness tells us that “All sweet things will come again.”  As gentle as that phrase falls upon us, it’s as heavy-handed as he gets.  Even the disc’s closer “Mixtaped,” a comparison of losing the sharing of thoughts and emotion once a love dies to being “mixtaped,” serves as a mere description of the mind of the subject in the song. Wilson’s quiet guitar feedback, Bowness’ echoed vocals and Theo Travis’ flute and clarinet merely direct us to our own thoughts rather than forcing us towards them.  Genius!

Schoolyard Ghosts may not grab hold of you at first listen.  At least that was my experience.  I did feel that there was something much deeper happening on Ghosts that required my complete attention.  I was generously rewarded for my efforts.  Kscope/Snapper’s package contains a bonus DVD of videos for the songs “All Sweet Things,” “Truenorth” and “Wherever There Is Light.”  These clips, in black-and-white and devoid of MTV-style fast cuts, are perfect compliments to the music of No-Man.  It was actually when I sat down to watch the DVD that I was pulled into the web No-Man had woven.  I’m now greatly looking forward to increased activity from No-Man in 2009 with promises of further releases and live gigs outside of the U.K.