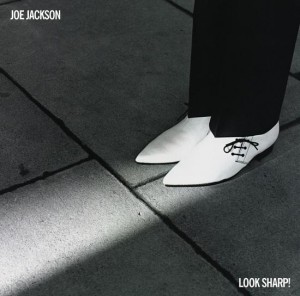 Vinyl Lovers Records has reissued Joe Jackson’s solo debut, Look Sharp! as a 10-inch double record that includes the bonus cuts “Don’t Ask Me” and “You Got The Fever.”  Hearing this record 30 years after it initially hit the stores, and in this unique format, rekindles the excitement that we first experienced knowing that great music didn’t have to be disco or brain-blastingly heavy.  Look Sharp! is an unabashed pop record using the tightest combo with which Jackson ever worked.  Some songs may be better known than others, but there isn’t a single bad moment from start to finish.

From Gary Sanford’s opening guitar riff on “One More Time,” merely a set-up for the rhythm section of bassist Graham Maby and drummer Dave Houghton, we already know that we’re in for something altogether different.  This is a Joe Jackson record, for chrissakes, and he hasn’t even sung or played piano before we’re helplessly drawn in.  Jackson, long a commentator on the complexities of love and the social idiosyncrasies of the modern age, is telling us about one love gone wrong.  With “Sunday Papers” he’s forcing us to look into the mirror to examine our voyeuristic view of the world and how some of us would prefer to live vicariously rather than make our own news.  “Is She Really Going Out With Him?” contains the unforgettable hook in another song about a love gone wrong or at least gone down Joe’s street with the gorillas.  It’s one of the best pop songs ever recorded and a vital piece to any serious music fan’s collection.

Three songs in and we’re hearing that Jackson has a knack for examining human relations and expressing the obvious with words most of us are unable to find.  He’s a bit bitter at age 25, and that attitude had an appeal for fans of the angry young man school of rock.  “Happy Loving Couples” is a complete damnation covered in sour grapes.  “Throw It Away” is a punked-out expression of sentiment regarding the poor getting poorer and big brother bosses in their towers that remains even more true in the latter half of the ought nines.  We could all just hit the club and try to forget about this heartache.  “Baby Stick Around” urges this escape in a chorus of Jackson vocals and with Maby slapping the crap out of his bass.  It’s a rare moment of optimism from Jackson, but we understand it’s the exception to the rule.

With a title like “Pretty Girls”, we have a good idea what we’re in for.  The “down do be do do wop a do do wop” is only ironic concealment of the realization that Jackson won’t ever be with any of the ladies that are driving him wild.  “Look Sharp!” is the best song on the record and the obvious choice for a name for the collection.  Houghton’s incredible bass-snare-crash interplay as the song breaks down into Jackson’s jazz chordings will never leave your thoughts once you’ve heard it.  We can take on this hard, cruel world if we just pay more attention to how nattily we’re dressed and by watching out for who might be looking to do us harm.  Give in to complacency and we’ll all “(Do The) Instant Mash”; with consumer culture taking away our free thought.  “Don’t Ask Me” tells us to figure it out for ourselves.  Jackson’s just chronicling what’s wrong, not offering solutions.  But he plays a mean harmonica while he’s making observations.

You like reggae, do you?  So does Joe.  “Fools In Love” is another destruction of those godforsaken couples that Joe keeps seeing all over the place.  But, whoops!  Joe’s the fool in love this time, dammit.  Maby’s doing his best Robbie Shakespeare and Sanford’s all wickety wack like “Chinna” Smith.  Change gears drastically and we have the closest thing Jackson ever did to a straight up punk song.  “Get The Time” is a showcase for the whole combo and at break neck speed to boot.  It’s the only way to do a song about everything moving so fast that you can’t keep up.  Vinyl Lovers tacks on “You Got the Fever” before sending us on our way.  This diminishes the impact of “Get The Time,” but maybe they were thinking that we still had the time for one more love gone wrong song.

Whatever you do, don’t pass this record by.  You must own it in whatever form you feel is appropriate.  If you like the vinyl, track down this version and you won’t be disappointed.  For the folks that were into Joe Jackson back in the day, they might tell you that it’s the only one of his records that you need to own.  I was just a little metalhead kid back in ’79, so my opinion of the era is somewhat skewed.  All I can be certain of is that this is the place to start exploring all of the great music that Jackson has given us over the years.  He never has made another record quite like this, nor has anyone else.