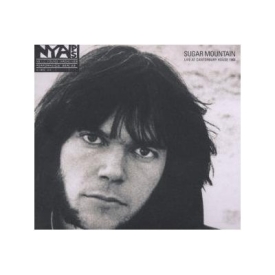 Neil Young was just days away from his 23rd birthday and the release of his first solo album when he played the gigs that comprise Sugar Mountain – Live At Canterbury House 1968. And what impresses most is how many great songs Young had already penned. As a member of Buffalo Springfield, Young was responsible for the bulk of the band’s best work, including such stylistically disparate tunes as “Mr. Soul,” “Broken Arrow” and “Expecting To Fly.”

With the Springfield, Young shared the lead guitar role with Stephen Stills, but that would soon change as he ventured from group success into the unknown waters of a solo career. And it’s that foggy time we hear Young performing over two November nights in Ann Arbor, MI, on Sugar Mountain.

His between-songs banter is funny and self-effacing – Young was clearly having a good time, all the while making the transition into his new musical life. It’s fascinating to learn that “The Old Laughing Lady” – a sleepy gem from his debut album – was written way back in 1964. And I love hearing Young play the in-progress melody to what would become “Winterlong,” before fielding song requests.

The set list is a veritable early best-of, including the aforementioned “Mr. Soul,” a lilting “Expecting To Fly,” a guitar-backed “Birds” and a stripped-to-the-bones “Broken Arrow.” Young also plays a lovely version of my favorite track from his first album, “I’ve Been Waiting For You.” I was also happy to see the inclusion of “The Last Trip To Tulsa,” one of Young’s most bizarre lyrical concoctions. And if the version of “Sugar Mountain,” sounds familiar, it should – it’s the one that appears on the 1977 triple-LP set Decade.

Sugar Mountain only hints at the greatness that Young would achieve during the 1970s, a decade that he ruled over like no other artist. But that’s discussion for another time. This portrait of the artist as a young man is a fascinating snapshot of Canada’s greatest musical son.

Technical note: I’ve read the complaints about the DVD not depicting any visuals beyond a static image of Young’s face with snow falling around him, instead of actual video footage of the Canterbury performance. And, unfortunately, the disc packaging does little to convey explicitly that the DVD contains primarily high-resolution (24 kHz, 96 bit) audio tracks. But I’m not going to condemn Young for trying to present his music in the best format available – note, there is no coupon for an MP3 download, or anything of the like. In this crazy world of convenience vs. fidelity, Young has maintained an admirably stubborn devotion to preserving and presenting sound in the best possible manner. After all, you bought this for the music. Right?