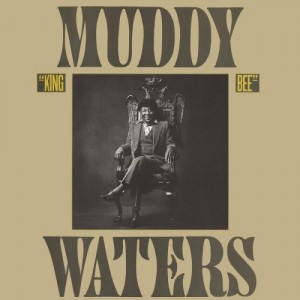 King Bee was the first Muddy Waters’ album I ever heard, which strangely would prove to be the great blues man’s final studio recording. King Bee was the third in a series of records that Waters recorded with protégé Johnny Winter in the late 1970s. The fruitful collaboration brought Winter home to the blues and found Waters playing and singing with an intensity and joy that carried over from his electrifying performance at The Band’s 1976 swan song, The Last Waltz concert. There, he tore up the stage with a transcendent version of “Mannish Boy,” that had Robbie Robertson howling in response, as Waters seemed to channel the very spirit of the blues.

So Waters and Winter began working together in 1976, and the pair produced a trio of terrific studio albums: Hard Again, I’m Ready and King Bee. The latter, however, was the most difficult to make. Waters’ band was on the verge of breaking up as tracks were recorded for King Bee, and several of the songs that made it to final vinyl were outtakes from the Hard Again sessions. And when the album was reissued in 2004, on compact disc, the release was appended with two additional previously unreleased cuts, “I Won’t Go On” and “Clouds In My Heart.”

This is a blues album through and through, and Winter’s production does nothing but serve the music. The arrangements are lean and mean, with nod to the raw studio sound of Muddy’s early recording days with Chess Records. Blues it is, but the feel and attitude are rock and roll, pure kick-ass rock and roll.

The opener, “I’m A King Bee,” finds Waters buzzing ‘round the hives of his various honeys, as Jerry Portnoy plays a fluttering harmonica line that can be taken as the wings of the king bee approaching his target. Willie “Big Eyes” Smith keeps the boys in the pocket here – and throughout – with a powerful bass-and-snare drum beat. “Sad Sad Day,” “Mean Old Frisco Blues” and “No Escape From The Blues” are among the many highlights here – electrifying, electric blues. “Deep Down In Florida #2” is a remade romp through the backwoods and big cities of the Sunshine State, with Muddy passing through Gainesville, Newberry, Miami and other orange grove burghs.

Waters was not just a great slide and electric guitar player; his vocal phrasing and delivery were inimitable. Listen to Muddy preface “Champagne and Reefer,” with his “Alright… OK… We gone… Rollin’” before the three-note riff kicks the door in. And of those two bonus tracks: “Clouds In My Heart” could be the best song of the bunch. How this didn’t make it onto the original LP is a mystery. Longtime Waters’ guitarist Bob Margolin adds some sparkling 6-string work to this gorgeous number.

King Bee was released in May 1981, and nearly two years later (April 30, 1983) Waters died in his sleep. In a later interview, Winter said, “The most fun I ever had was working with Muddy.” Waters could channel the primal wail of the blues as good as anyone, and it must have been something to watch and hear when he was laying down these tracks well past the age of 60. Thirty years later Muddy remains the King Bee.