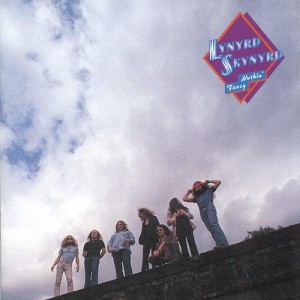 So, I just bought my first Lynyrd Skynyrd record!  I say that because it feels weird to acquire one of their records after collecting for about 35 years.  I’ve got things in my collection that some folks would absolutely hate, but I know few people that dislike Skynyrd.  Why the wait?  Well, for all of my high school years and most of the way through college I had a very warped perception that Skynyrd was not much more than a group of ignorant rednecks.  I hadn’t taken the time to investigate what they were all about until several years later.  By the time I was starting to appreciate their talents, I was also listening to a huge variety of other music.  Skynyrd really just slipped through the cracks for me.

Why begin with the band’s third record, 1975’s Nuthin’ Fancy?  Trust me; I did some research before making the purchase.  I’ve always liked a rawer sound from Skynyrd and Nuthin’ Fancy is free of clutter, taking the sound right down to the essential elements.  The record also contains my favorite Skynyrd song, the famous, anti-handgun ode, “Saturday Night Special.”  It’s especially nice to hear that track on CD, rather than over the radio, because the taut guitar lines of trio Gary Rossington, Allen Collins and Ed King not only punch harder than I’d realized, but I’m also able to better marvel at the solid bass guitar work of Leon Wilkeson and the fabulously underrated drumming of Artimus Pyle.  Pyle definitely brought something to Skynyrd’s sound that they likely didn’t even realize they were missing.  His style is very professional and accurate, but his unconventional fills demonstrate artistry previously only credited to the guitarists and singer Ronnie Van Zant.  He seems, certainly on “Saturday Night Special,” to be thinking of and committing to beats that lesser drummers might let pass on by.

There’s plenty more to comment on with Fancy.  Another great King-Van Zant composition is “Railroad Song,” featuring some hobo harmonica from Jimmy Hall, a red-hot solo from Collins, and a lead guitar line from King that feels like something from the U.K. rather than from Jacksonville or Atlanta.  Van Zant had a knack for making the down and out subjects of his songs seem as if they were leading lives that were either spectacularly exciting or approaching mythic importance.  Riding the rails never sounded as cool until Van Zant celebrated the lifestyle.

“On The Hunt,” which kicked off Side 2 on the original vinyl LP release, is a song which defies easy description.  I’ve heard it compared to heavy metal, but I’d have to take the “metal” part out to feel good with my summary.  It’s more of a heavy blues with a mid-tempo pace and it gives the guitarists, especially soloist Gary Rossington, room to explore their talents.  This is perhaps Van Zant’s best performance on the record.  Delivering lines like, “I know who you are, babe/And I know what they call you, girl” with complete dominance of his vocal range, Van Zant tells the tale of his similarity to a woman of low repute.  He compares their search for “companionship” in such a way that he isn’t considering her to be slutty.  She’s on the hunt.  Just like him.

“Am I Losin’” changes gears completely as King and Rossington go acoustic.  This is just good ol’ classic country rock with equal parts of both.  King’s solo is stunning and moving, especially as he steers the band through a funky little break heading back into the pre-chorus.  At this point in his career, he could have gone up against The Allman Brothers’ Dickie Betts and called the duel a draw.  The band’s loss of his skills following Fancy’s release would have been a tragedy had they not discovered the energy of Steve Gaines.  It’s also worth noting that producer Al Kooper’s background vocals on this track are very strong, as they are on most of the album’s cuts.

The original LP closed out with another barroom rocker in one of the few songs in the band’s repertoire co-written by keyboard player Billy Powell (the badass flipping us the bird on the album’s back cover).  Powell, King and Van Zant came up with something that blended the honky tonk piano with shuffling blues, powerful guitars, and lyrics suitable for tavern patrons both north and south of the Mason-Dixon line.  “Whiskey Rock-A-Roller” could only be better with a crowd of fans belting it out along with the group, but a band with smarts like Skynyrd’s certainly had that in mind all along.

The 1999 CD reissue of the album is augmented by Ron O’Brien’s liner notes and live versions of “Railroad Song” and “On The Hunt” recorded at Bill Graham’s Winterland on April 27, 1975.  Pyle is remarkable in a live setting, with an unusual effect on his busy hi-hat during “Railroad Song” that sounds just like a train skittering on down the line, and impressively confident fills running across his entire kit.  The guitars on “On The Hunt” are just sloppy enough to let you know that the band is getting comfortable with the new material, but as demonstrably tight as a band that’s spent the majority of the previous two years out on the road.  There’s something about live Skynyrd that leaves us feeling as if we’ve missed the full effect by not being present in the crowd on that night, however.  The power of their delivery on these recordings is merely a tease.

I’ve chosen wisely by starting my Skynyrd search with Nuthin’ Fancy.  In fact, it fits right in with the rest of my collection as if it hadn’t been missing all these years.  The band was in such a whirlwind of touring and recording at this time that they were just damned glad to get another one checked off of their record label contract’s requirement.  The name, Nuthin’ Fancy is almost like a sigh of relief for the band.  They weren’t yet able to offer the perspective necessary to consider the record as containing very impressive material which held up to that found on their first two records.  It may not be fancy, but it sounds mighty fine to these ears.