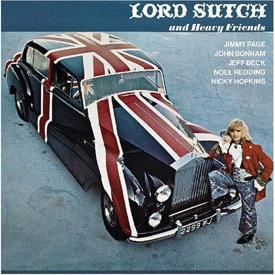 What’s not to love about Sundazed Music? Their re-release of recordings considered essential by collectors, yet out of print for decades, never ceases to astound. Their High Definition Vinyl output is especially impressive. Let’s give a listen to an infamous record that has been slagged by some critics and ignored by Atlantic Records nearly since its first release back in 1970 – Lord Sutch and Heavy Friends.  Sundazed knows the importance of this record and so should you.

Lord, or Screaming Lord, Sutch as he was alternately known had been gigging around the U.K. since the early ’60s. He was actually rather innovative in his stage show, having stolen the horror- show gimmickry from his namesake, Screamin’ Jay Hawkins, and taken it to another level.  He had a bit of a reputation leading up to the recording of his debut full-length album as a political oddball and proponent of cutting-edge swinging London fashion (especially with his long hair and historical costuming).  Sutch had no trouble attracting quality musicians to his camp despite his acknowledged limited vocal abilities; even a young Ritchie Blackmore slung axe for Sutch before forming Deep Purple. Enter Jimmy Page, ever the studio rat even into his early success with Led Zeppelin, and an unholy partnership was formed. Page co-wrote several songs with Sutch and agreed to produce an album for him. With his own formidable musical connections, Page attracted Experience bassist Noel Redding, fellow guitar phenom Jeff Beck, piano wizard Nicky Hopkins and Page’s own regular drummer John Bonham to the studio for some fun. What came of the sessions was originally thought by the musicians to be demo recordings that would undergo more polishing before being unleashed on the public. Silly musicians! Cotillion released Lord Sutch and Heavy Friends following what Page considered to be the record’s completion and it faced an immediate denunciation from the musicians involved. Many music fans also disliked the result. The record, and Sutch to some degree, began a rapid descent into obscurity. I feel, however, that history has done wrong by Sutch, Page and the Heavy Friends. It’s an extremely listenable record with several quality performances. It deserves, and Sundazed was right on this of course, a closer listen some decades on.

As each song does not have individual credits, we are left to pick out unmistakable performances based on the style of the musicians involved. And it ain’t hard. Side one begins with “Wailing Sounds” and it may as well have been an unused Zeppelin track with Sutch instead of Plant on vocals. Page recycles riffs found on the first two Zeppelin albums and uses many of the guitar effects that he was known for early on. The opening riff sounds as if it’s stolen from “Helter Skelter,” but it’s all Page and Bonham after that. “’Cause I Love You” follows and is again featuring solos made famous by Page in Led Zeppelin, but has different studio musicians behind him. The song is a little sloppy, but the so were the first two Zeppelin records. Sutch has no ability to emote, but rather adds a bit of grit to a delivery that’s one step up from monotone.  We’ve heard a zillion tracks like this on Nuggets and Pebbles collections by garage bands throughout the world, and we love the stuff.  This is at least that good; one step below what Page had done elsewhere, but still quite good.  Side two’s “Union Jack Car” tells the true tale of Lord Sutch touring around in his Rolls Royce decked out in Britain’s emblem.  It’s a 4-bar blues, not unlike “Sweet Little Sixteen,” but hints at punk music as do several other songs on the album.  We learned to appreciate the vocal shortcomings of many punk singers over the years and I think we can easily do the same for Lord Sutch.  “Brightest Light” is one of the few songs not co-written by Page, but it brings new elements in background vocals and an organ.  Page, the producer is showing the innovation that he has been known for on this song.  If we had heard this track 20 years later as recorded by Pavement, we wouldn’t have flinched.  The record closes out with “Baby, Come Back,” which is sort of a maxed-out “You Really Got Me” kind of song.  Remember, Page played guitar on a lot of old Kinks’ singles, and he’s dredging it all up once more on this tune.  The proto-punk feel of the song and basic, guttural vocal delivery had been extremely influential on garage-psych punks and also, much later, heavy metal bands.  The listener gets to thinking that Page may actually have contributed to a style of music (punk) that eschews everything he’s known for (Zeppelin). Wild!

Check this record out; it’s an absolute hoot. Whether you’re curious about the character Sutch, interested in the various projects Jimmy Page has been involved in over the years, or as a document of what sorts of attempts were being made at popular British rock music back in 1970, you won’t be disappointed. And don’t forget to thank Sundazed for reproducing that spectacular album cover featuring Sutch and his Rolls. We no longer have squint to see Sutch’s sneer like we do when looking at the CD booklet.