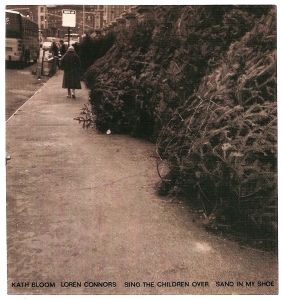 A bit of history: Kath Bloom & Loren Connors were a singer/guitar duo from New Haven, Conn., that recorded briefly but prolifically. From 1981-84, the pair released six albums of just a few hundred pressings each. Sing The Children Over was released in 1982 on the tiny Boston, Mass., label Ambiguous; Sand In My Shoe followed in ‘83, released on Connors’ own Saint Joan label. Both albums have now been reissued by the Australian label Chapter Music.

Focusing on stripped-down blues, spirituals and traditional work songs, Bloom and Connors developed a sound something like the McGarrigle sisters doing Robert Johnson tunes. The music is dusty yet exotic, full of the travails, odd turns and sheer wonder that make up a life. Bloom’s voice is sometimes delicate, sometimes eerie, wavering in and out of tune but always affecting and effective. Connors’ guitar playing is worth keying into, as he snakes along, between and through Bloom’s singing.

The recordings are intimate, putting you on the back porch, so to speak, as Bloom and Connors run down the backroads of American music and improvisation. If you like the aforementioned Johnson and McGarrigles, or your tastes run toward Captain Beefheart and Skip James, give these albums a spin before they slip away.