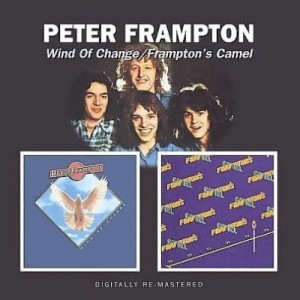 BGO (Beat Goes On) Records is one of my favorite labels. They specialize in rock, blues, jazz and folk reissues, covering four decades of music from the ‘50s through the ‘80s. Each release is a “two-fer,” usually combining albums of a certain period or those with stylistic similarities. The packaging includes a J-Card, and the liner notes are current and informative.

BGO have brought together Peter Frampton’s first two solo efforts, Wind Of Change and Frampton’s Camel, in a remastered, two-CD set. These early works would help make Frampton a solo star in a few years, when he brought the material to the stage and the masses with the landmark Frampton Comes Alive! And if you know Frampton only from that album, this two-fer will be an ear-opening pleasure.

Strong songwriting and superb guitar work mark these two recordings, with Frampton moving from acoustic and electric guitar with ease. His fluid, lyrical playing is often so easy on the ear that it’s easy to overlook how skilled the man is with a pick.

Wind Of Change is the more mellow, opening with the dreamy “Fig Tree Bay” and moving through the acoustic-tinged title track, “Lady Lieright,” which has the flavor of George Harrison’s “Here Comes The Sun,” “Hard” and the plaintive string-backed “Oh For Another Day,” Frampton excels at writing ballads and lilting rock tunes. The rock boots come on with “It’s A Plain Shame,” “All I Want To Be (Is By Your Side)” and the piano-pounder “Alright,” backed with an all-star cast including Ringo Starr, Billy Preston and Klaus Voorman. And check out the cover of the Rolling Stones’ “Jumping Jack Flash,” which under Frampton’s vision becomes a funked-up, jazzed-out guitar twirl.

While Wind Of Change is an excellent debut – cool cover art, too – Frampton’s Camel betters it. Frampton wrote most of the material in New York, and the album was his first recorded in the United States. From the opening punch of  “I Got My Eyes On You” to the album capper and subsequent tour de force “Do You Feel Like We Do” (performed here sans talk box), Frampton and Camel run through a set of nine songs that rock, sway, swoon and end much too soon. Overall, the sound is heavier with more crunch, but with  plenty of dynamic shifts, from the soft (“Which Way The Wind Blows” and “Just The Time Of The Year”) to the gritty (“White Sugar”) to the bittersweet (“Lines On My Face“).  The cover of Stevie Wonder’s “I Believe (When I Fall In Love With You It Will Be Forever)” is terrific, too, spiced with some fine fretwork and singing.

Like so many great albums, Frampton’s Camel is just that – an album, with each song a part of the whole. Releases like these are more important than I can say. Do yourself a favor and get this reissue now!