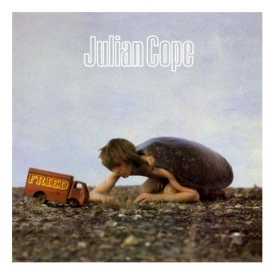 Under license from Universal Music, Vinyl Lovers Records brings us the infamous second solo record from Julian Cope, Fried.  I use the word “infamous” because Fried marks the point at which Cope began to find himself at odds with major record labels.  In fact, Fried’s lack of attention by the record-buying public caused Mercury Records to drop Cope from its roster.  This usually relegates a release to that great cut-out bin in the sky.  Thank Vinyl Lovers for resurrecting this release for fans of Cope and vinyl in general.

Fried was originally released in 1985, following Cope’s departure from post-punk favorites, The Teardrop Explodes and his solo debut World Shut Your Mouth.  The cover of the record shows Cope hiding beneath a giant turtle shell, gazing at a toy truck with the album’s title printed on the side.  “Fried”, indeed!  Cope’s lysergic deviations are thinly concealed on the record’s 10 tracks (Vinyl Lovers adds three bonus cuts for your enjoyment).  He’s masked his disdain for organized religion, and, well, organized anything beneath clever pop songs.  As a student of music of all types, Cope has always been able to present a variety of genres bearing his own chaotic style on each of his albums.  Fried is an absolute gem and bears examination by fans of mid-80s British pop music.

The post-punk influence is evident on the record’s opener, “Reynard The Fox.”  While Cope has consistently surrounded himself with quality musicians – in this case guitarists Donald Ross Skinner and Brother Johnno, guitarist/producer Stevan Lovell, and drummer Chris Whitten – it’s Cope’s bass guitar that recalls the best of early to mid-80s British pop with a bent towards all things punk.  Cope’s mid-song rant about the “plastic bag with plastic handles” is where the psychedelia oozes in.  And we’re off to rambles about what “Bill Drummond Said” and a “Laughing Boy.”  It’s all pop of varying tempos, and it’s slightly more trippy than what the pop crowd had been braced for.  Cope’s charisma is the driving force on Fried and all of his records, really.  The music’s so good and so catchy that you don’t care what he’s singing about.  “Me Singing” questions this.  By the end, we don’t care too much about what he’s singing and we’re ready for Cope’s opinions to blend in with our own.  “Sunspots” is a plodding wade through Cope’s love of sounds and syllables.  No credits are given to the flute soloist, but Cope has already jacked us out into the stratosphere with his bizarre ruminations.  When he tells us “I Went On A Chourney”, we’ve no doubt that it’s just one of many.

Side two’s “The Bloody Assizes” could have been a rockabilly song if handled by someone else.  Cope punks it out before mellowing on “Search Party”.  Love songs are not atypical of Cope and “Search Party” is one of his best.  The oboe and descriptions of a disgusting cradle are what separates Cope from anyone else.  “O King of Chaos”, with its simplistic piano chords is pure autobiography.  Yet everything on side two moves along quickly.  “Holy Love” dips back into pop that’s too smart for Casey Kasem.  The returning oboe clinches it.  “Torpedo”, the original album’s closer, has Cope at the organ for the accompaniment to another hopeless plea of a love song.  Bonus track “Mic Mak Mok” is Cope playing with alien/robot vocal sounds and “Land Of Fear” is a mid-tempo, uplifting finish.
I give my highest recommendation to Vinyl Lovers’ reissue of “Fried”.  If you have never heard the record, this may be the best way to first familiarize yourself with a Julian Cope classic.