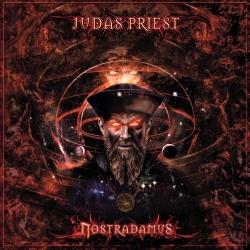 In the still-rather short life of rock music, many bands have recorded concept albums. But few bands have taken the “concept” concept to such lengths as Judas Priest has with Nostradamus. This ambitious work features 23 songs and more than two hours of music spread across two compact discs. Based on the life of the French “seer” Nostradamus, Priest delves into the prophet’s life and the politics of the day. Song titles alone, such as “Dawn Of Creation,” “Prophecy” and “Revelations,” reveal the mystical bent of the man and this music.

Nostradamus operates like a full-length soundtrack to an imaginary movie. Those expecting nonstop metal will be disappointed, not that the album is lacking energy or plenty of hard-charging guitar; but there are also keyboard passages, orchestral and choral sections, gentle acoustic guitar interludes and other such less-metallic moments. Whether a ballad or full-out rocker, the music is dramatic and engaging. And the pacing and dynamic shifts give more, well, weight to the heaviest tracks.

What makes Nostradamus so convincing is that it sounds like the band members, by introducing non-rock influences, are giving listeners a glimpse into the music they probably listen to when not playing in Priest. And those collective influences serve to heighten the writing. Working on this project (and completing it!) must have given the Priesters an incredible creative high.

I particularly like Disc 2, as it contains my three favorite songs, “Exiled,” “Alone” and the glorious title track. “Nostradamus” opens like an oratorio from a war opera, with Halford singing in that dramatic way only he can before a pummeling guitar riff – the riff of the record – makes it entrance. Halford then lets loose with a 6-second scream that sounds like a cry of redemption. And Downing and Tipton unleash some incredible lead guitar: The pair begin by trading licks before coming together for a phenomenal harmony lead. It’s one of the finest moments in the Priest catalog.

Nostradamus represents a high and singular moment in the career of Priest. It’s unlikely they’ll ever go for something like this again. It’s also the best thing they’ve ever done. Aren’t we lucky to hear it?