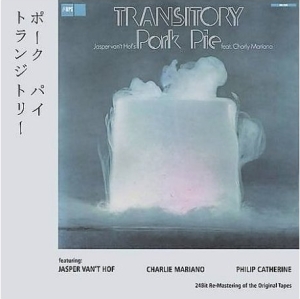 For a music freak, there’s nothing better than hearing a great band for the first time, even if the record in question is nearly 35 years old! Such is the case with the recent reissue of Jasper van’t Hof’s Pork Pie album Transitory, which comes courtesy of a new German-based label called Promising Music. Promising’s catalog veers toward the jazz/jazz-rock/progressive-rock spectrum, and the label specializes in taking original master tapes and digitally remastering them at 24 bit/88.2 kHz. Like another Promising release I recently heard – Don “Sugar Cane” Harris’ Sugar Cane’s Got The Blues – this album has a warmth and openness seldom heard on CD. The packaging is excellent, too, with a cardboard digipak replica of the original LP, liners in English and German – even the compact disc resembles a record, all black with a mini-label on top.

The strength of this album comes from the immensely skilled lineup, featuring van’t Hof on keyboards, Charlie Mariano on saxes and flute, Philip Catherine on guitars, J.F. Jenny-Clark on bass, Aldo Romano on drums, and Ivanir “Mandrake” Do Nascimento on percussion. The musicians take nine songs into territories defying expectations, turning right when you expect left. The opening “Epoch” is a fine example: Mariano, Van’t Hof and Catherine play lines that when examined separately don’t sound like they’re connected, but in the context of the group the music emerges and flows like whitewater – cascading in parts, calm in others, but always worth paying attention to. The tunes are also marked by a diverse range of styles and flavors, from Catherine’s Mahavishnu-esque “Angel Wings” and the two-part fusion exposition “Transitory” to the exotic “Pudu Kkottai” and the Zappa-like “Something Wrong.” Never boring, never predictable, this is jazz/rock, or whatever you want to call it, at its finest. And check out Jenny-Clark’s fabulous acoustic bass playing – the unamplified instrument resonating proudly within the context of this remarkable session.