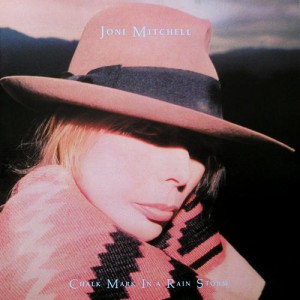 In 1988, veteran pop singer Joni Mitchell was working through a contract with Geffen Records and trying to recapture some of the magic that she’d enjoyed with the successes earlier in her career.  The success would prove fleeting, but Mitchell’s attempts would bring very clever experiments into her catalog of recordings, already rich with surprises.  It’s at this point in Mitchell’s career that I first became a fan as I dove headlong into Mitchell’s pool of albums.  Her latest, Chalk Mark In A Rain Storm, saw Mitchell taking a slightly different approach in her pursuit by inviting a number of excellent, well-established singers to add their vocal talents to her own.  It’s a record that’s often only notable for that fact, unfortunately, yet the songs included therein are easily some of Mitchell’s most memorable.

Chalk Mark, as with most of Mitchell’s records, is produced by the songwriter herself, this time joined by her husband at the time, bassist Larry Klein.  The music for most of the tracks is performed by Mitchell (guitars, keyboards), Klein (bass, keyboards, programming), and drummer Manu Katché (Peter Gabriel, Sting, and far too many others to mention).  Katché’s West African rhythms and Klein’s growling and swooping style (so similar to Tony Levin’s work with Gabriel and King Crimson) pull the tunes in the direction of recent work by Peter Gabriel.

Recorded at Gabriel’s English studio, it seemed only fitting to begin the record with Mitchell’s duet with her host, “My Secret Place.”  The arrangement is lush and relies on the strengths of each of the musicians involved.  Gabriel’s and Mitchell’s vocals intertwine in a way that either singer has yet to reproduce.  It’s the most Gabriel-like of the record’s tracks, which is a good thing, but it’s marred by the album’s only drawback, a dated keyboard sound that grows tiresome quickly.  Mitchell has fallen prey to this error previously, that of producing music that is firmly fixed to the time in which it was created.  This was also her downfall on the work that she produced with L.A. Express and saxophonist Tom Scott.  Perhaps in her desire to stay relevant, the “sound of the day” is exactly what Mitchell was aiming for, but the outcome is what prevents the music from being truly timeless.  The song’s lyrics are timeless, however, expressing a need for privacy and an explanation of the energies it requires to let one’s walls down.

The “trapped in time” dilemma also holds true to some degree on side one’s closer, “Dancin’ Clown.”  Here Mitchell’s vocal cohorts are Tom Petty and Billy Idol.  While both musicians were big stars at the time, Idol’s star was waning and he’d soon be held to a lower regard than that of Mitchell’s other guests on Chalk Mark.  The appearance of longtime Idol guitarist Steve Stevens also dates the piece.  Stevens’ style is distinctive and impressive, but it recalls Idol’s mid-80s hits.  The cast of characters is also joined by Thomas Dolby on “Fairlight Marimba.”  Oddly, the song is a bit murky with all of these egos trying to express themselves, but so much pop music from the late ‘80s had the same kind of sound.  Mitchell’s obviously trying to craft another song that’ll get some radio play.  And while it never became the big hit that it was hoped it’d become, it’s still a fun song at the same that it’s an odd historical document.

Side two is where it gets more interesting for me.  Leading off with Mitchell’s duet with classic cowboy Willie Nelson on the classic cowboy song, “Cool Water,” Mitchell augments Bob Nolan’s lyrics to transform the song into an environmental alarm calling attention to Earth’s vital freshwater reserves.  It’s not nearly as heavy as it sounds, with that pesky keyboard programming dulling the words’ impact.  And once again Mitchell’s voice retains its angelic flexibility while merging with Nelson’s characteristic chill out.

The song is followed by “The Beat Of Black Wings”, told from the point of view of a fatalistic war veteran and featuring The Cars’ Benjamin Orr on background vocals.  It’s the song from which the album’s title is derived, equating a man drawing pictures in chalk on a sidewalk with a soldier’s value of his own life while he tries to drink away his pain.  The lyrics are dark, but sung in Mitchell’s usual, sweet manner.  The music is deceptively bright and very repetitious.  Orr’s part approximates a doo-wop/Jordannaires line contrasting Mitchell’s continuing “Johnny Angel” refrain.  Altogether it’s an open-ended statement that provides plenty of fodder for thought.

Following Mitchell’s spectacular duet with Don Henley, “Snakes And Ladders,” is “The Reoccurring Dream,” a biting comment on the psychological damage caused through consumer culture.  The two songs are a one-two punch offering mirror images of success and failure, as well as conflicts created by internal and external expectations placed upon us.  Mitchell’s multi-tracked voices on “Dream” represent one of her boldest experiments in her career.  Interspersed with mock commercial slogans, Mitchell’s amazing ability to influence emotion through her art parallels the sway held by the advertising machine rampant in modern capitalism.  Our old hippie girl comes out to let us know that we’re losing our freewill when under the influence of corporate giants’ during their need to feed.

Chalk Mark In A Rain Storm may not usually be ranked alongside Joni Mitchell’s better known collections such as Blue or Court And Spark, but it was a grammy-nominated album and is likely Mitchell’s best record released during the 1980s.  If you find this one in cut-out bins or on import CD, don’t hesitate to pick it up.  Its melodies have haunted me for years, as Mitchell’s best melodies always will, and you shouldn’t deny yourself the same experience.