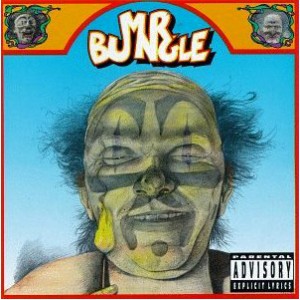 A few months ago, I took the time to write some words concerning Mr. Bungle’s sophomore album, Disco Volante.  My goal was to preach the gospel of Bungle to the masses, but apparently there are a few of you that are yet unconverted.  Let’s go back a bit further, then, to Mr. Bungle’s debut album from 1991 to see if I can’t bring a few more of you in to the fold.  You’re obviously unaware of the hole that exists in your life and your record collection.

To recap, Mr. Bungle is the band formed while Faith No More vocalist Mike Patton was still in high school.  Instead of kicking his boys to the curb when Mike got the good gig, he kept both bands going simultaneously.  Mr. Bungle only released three albums on Warner Brothers (other “albums” were sold by the band at shows and are extremely hard to track down), but the first two contain pure harnessed chaos.  Critics have called the releases unfocused, but that just shows that they missed the point completely.  True agents of chaos will try to keep everyone guessing at all times and Mr. Bungle literally forces you to step outside of your comfort zone of expectations as you listen.

The musicianship across Mr. Bungle’s John Zorn-produced debut album is impeccable and matches Patton’s man of a million voices approach.  Patton (calling himself “Vlad Drac” in the credits) is fearless as he attempts every style that comes to mind and he and the band continue to push one another forward to the next Evil Knievel daredevil moment.  Guitarist Trey Spruance (credited here as “Scummy”), bassist Trevor Dunn, and drummer Danny Heifetz show a command of their instruments usually demonstrated by the wildest of free jazz musicians or avant garde masters several decades into their careers.

Examples?  Well, “Slowly Going Deaf” with its Patton-crooned dream intro abruptly dissolves into crushing metal and very rapid-fire ska.  In case that doesn’t mix it up enough, the spare measure of doo-wop is thrown in here and there to keep us off kilter.  Spruance’s dissonance and Heifetz’s spectral percussion demonstrate their genius and Patton’s maniacal screams will scare the pants off of you.  Speaking of losing your pants, the segments in between songs are hilarious and disgusting all at once.  Bridging “Deaf” with “Squeeze Me Macaroni” are the sounds of a man sprinting to a bathroom stall before he has some very noisy reactions to the food he just ate.  While contributions are being made to the porcelain god, an aged Colonel Sanders flubs his lines during a KFC ad outtake.  Remember, kids, this is the age of the unrestrained sample and Mr. Bungle weren’t afraid to include well known celebrities, video game and pinball noises, and film dialog both pornographic and from children’s instructional shorts.

“Macaroni” contains some of the most ridiculous moments on the album.  The music is a funky jazz thing with Patton delivering the lyrics blindingly fast.  The words fly past in several “Did he just say that?” moments of equating food and sex.  Carefully orchestrated metallic phrasings are also inserted by the band, but the spotlight tends to shine on Dunn who shows us everything that a funk bassist needs to have mastered.  This song blends into another between song sample-fest featuring Dennis Hopper as Frank in Blue Velvet telling us what warm beer does to him amidst screaming voices and crowd noises.  “Carousel” emerges from the disorder with its horn section-enhanced carnival ska and heavy metal interludes.  Patton’s contribution is goofy, but takes him to the extent of his range at numerous times, when he’s not simulating puking or a demented old man’s laughter, that is.

Sadly, Mr. Bungle did not survive intact as Patton’s career ascended and the side projects beckoned.  But the legacy left by their recordings will continue to leave us asking, “How the hell did these albums end up on a major label?”  Patton seemed to be well aware of the cash cow that Faith No More had become for Warner’s, so he pushed the Mr. Bungle recordings to the extreme, knowing his fame would prevent the label from cracking down on him too much.  Fans of Frank Zappa and also John Zorn’s own solo recordings will love Mr. Bungle and will want to track down their first album just for starters.  Anyone who’s been amazed at Mike Patton’s diversity over the years will need this record as well.  And for those of you who think you can handle it, take a chance on Mr. Bungle to replace what you’d thought was the wildest record in your stack.  Once converted, you can decide for yourself when it’s most appropriate to hold weekly services.