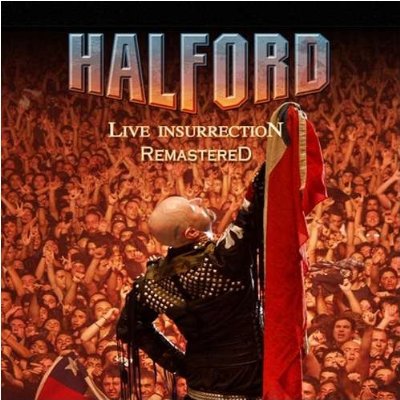 It’s difficult to think of heavy metal and not ponder the talents of Rob Halford.  Despite his return to the legendary Judas Priest and the success that they’ve experienced with Nostradamus, Rob Halford recorded some brilliant metal records in the years he spent away from the Priest.  He’s also gained some business acumen in the years he’s spent in the music biz, acquiring and retaining the rights to the majority of his “solo” releases.  His own Metal God label has allowed him to control the remastering, pace and format of these releases ensuring complete artistic control.  With this control, he’s able to maximize interest in his work following renewed fame for Priest.  This review is part one of a two-part examination of a pair Rob’s works — the first two records from his band, Halford.  We’ll take them in reverse chronological order and take a listen to Live Insurrection first.

After some stylistic experimentation with the bands Fight and 2wo, Rob Halford wisely decided to take his music straight back to what his fans loved best with a band named Halford.  The bone crushing onslaught of their debut Resurrection was a dream come true for metal heads and it was clear that Halford needed to take this material to the stage.  Listeners that wondered if studio tinkering that allowed Rob to pick the perfect take would fall flat once he stood before the masses would be reassured that this was no fluke.  Live Insurrection not only delivered the goods with superior versions of songs from Resurrection, but displayed a band allowed a degree of flexibility to experiment and deliver a few surprises.  Halford’s co-conspirators on this double-disc set are guitarists Michael Chlasciak and Patrick Lachman, bassist Ray Riendeau, and drummer Bobby Jarzombek.

With a total of 28 songs, Live Insurrection could be considered a bit overlong, but there are many highlights that continue to capture the listener’s interest throughout.  One standout track is the band’s version of “Light Comes Out Of Black,” a song Rob had recorded with the band Pantera for the Buffy The Vampire Slayer soundtrack.  This rarity shows Rob in fine form, alternately wailing and growling in a style used more by Northern European death metal singers (or Phil Anselmo).  The axe slingers out-Pantera Pantera while emulating Dimebag Darrell’s unique guitar sound.  Halford also dips into the Judas Priest catalog, most notably with blazing renditions of “Jawbreaker” from Defenders Of The Faith and “Hellion/Electric Eye” from Screaming For Vengeance.  The crowd singing along to the guitar part from “Electric Eye” makes for the perfect sixth member of the band.  We’re also treated to some guest appearances from Iron Maiden’s Bruce Dickinson on “The One You Love to Hate” and from The Scorpions’ Rudolf Schenker on that band’s “Blackout.”  Rob’s vocals are far more gravelly than those of Klaus Meine’s on this version, but he’s paying a fond tribute to his metal contemporaries.  Tacked on at the end of the 2nd remastered CD are a couple of polished demos for the songs “Heart Of A Lion” and “Prisoner Of Your Eyes.”  These are excellent new songs that foreshadowed the release of Halford’s second studio release, Crucible in 2002.

Halford’s gearing up or a pair of new releases in the latter part of 2009 and in 2010.  If you’ve been pumped up on the Priest lately, or ever for that matter, you ought to check out this outstanding live record for a taste of what else Rob’s other band, Halford might be cooking up for you.