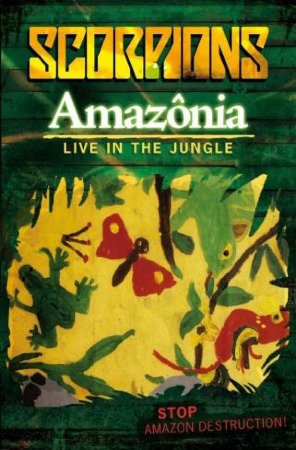 In August 2007, Germany’s  most successful music export worldwide, the Scorpions, already ventured deep  into the Brazilian jungle for a sold out show – in front of 40,000 enthusiastic  fans, the band played a concert in Manaus, the  metropolis on the Amazon river. A cooperation  with Greenpeace was already existent at this point and when the band returned  to South America the next year, they happily intensified  it. Klaus Meine, lead singer of the Scorpions, recollects, “Due to the  unbelievable success we returned to Manaus in 2008, but we also played Rio, Sao Paulo and Recife again. During the  show in Belem we accepted Greenpeace’s  invitation to participate in a three-hour flight across the rainforest in order  to get a picture of the proceeding destruction (an area twice the size of Germany has  been destroyed by fire so far). We wholeheartedly supported Greenpeace with  large banners saying “Stop the deforestation” during these shows and part of  the proceeds from this DVD will consequently be given to this organization that is committed in so many parts of the world.”

For many years, Greenpeace has been fighting against the rapid deforestation of the amazon rainforest and for the preservation of the  habitat of numerous animal and plant species and also of more than 180 native  peoples counting more than 200,000 people altogether. Scientists assume that  the rainforest will be gone by 2050 – given a constant “deforestation speed.” The consequences would be disastrous: People would lose their homes, animals  and plants would become extinct and the impact on the world climate would be bomb-like. The Scorpions have now also committed themselves to protecting this unique ecosystem. The rock icons’ DVD Amazonia – Live In The Jungle includes not only the complete show played in Recife September 7, 2008, and a “Special Feature – supported by Greenpeace” consisting of five live videos from  their legendary concert in Manaus in 2007, but also a Greenpeace documentation  of the Scorpions’ legendary flight across the amazon rainforest. Royalties of

Musically, the DVD is a highlight as well. Meine says,  “During the 2008 tour we had the pleasure to perform with Brazilian guest musicians. It was a wonderful experience and demonstrated very well how music  builds bridges and brings people from different cultures together.” In a  closing statement, the musician addresses his South American fans and says, “We  want to thank our Brazilian fans for the support and the incredible enthusiasm.  To quote James: ‘3 words: You kick ass.’ Brazil rocks!!!” And so do the Scorpions.

One thought on “Scorpions fight deforestation in Brazil”