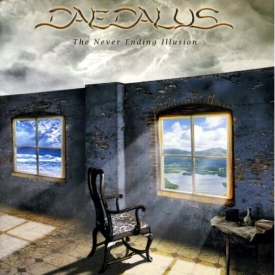 Daedalus is a prog-metal band storming their way out of Genoa, Italy, with the release of their second album, The Never Ending Illusion. If you’ve followed Daedalus since their first record, 2003’s Leading Far From A Mistake, you’ll note that the core group of bassist Fabio Gremo, keyboardist Giuseppe Spano and drummer Davide La Rosa are now joined by new members, singer Davide Merletto and the phenomenal guitarist Andrea Toretta.  Illusion is produced by the former guitarist of the German metal band Helloween, Roland Grapow, who does an amazing job at polishing the rough edges while preserving both the melodic and crunchy polarity that Daedalus delivers.  Imagine Dream Theater or Rush with a European flavor and more surreal lyrics and you’ll know whether or not this is your cup of espresso.

Daedalus is obviously Gremo’s baby.  He’s the principal songwriter and the solid backbone behind Daedalus’ heavier moments.  La Rosa contributes complex fills while propelling the band through many difficult time changes.  Spano’s talents are employed to move the group through key changes and for light synthesizer set-ups on several songs.  Merletto’s voice operates in a higher register that is far from annoying and only rarely delivers an odd pronunciation of the English lyrics.  Torretta however is the star of this outing.  He has no problem using different sounds and techniques depending on the needs of the song.  His Steve Howe-esque re-entry following the moving keyboard and vocal section on “Life” is stunning.  The galloping pick work at the start of “The Dancers” would make Dave Mustaine drool.  The acoustic performance on the disc’s closer, an original piece that plays like a classic Italian folksong, “Mare Di Stelle,” is the perfect complement to the French horn, xylophone and string section throughout.

Daedalus breaks down the barriers sometimes encountered as Europeans work within typically American approaches to music.  If the group can sustain this line-up as they cross the Atlantic after conquering their own continent, we’ll definitely be hearing more spectacular recordings such as Illusion.