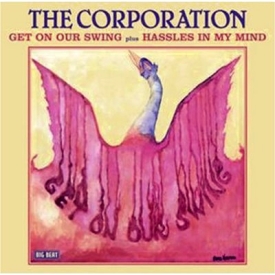 Collectors of rare psychedelic music may be the only ones aware of Milwaukee, Wisconsin’s, finest band of the late ’60s, The Corporation.  Sure the band released its first record on Capitol and opened for The Cream as they blew through Middle America, but The Corporation both burned out and faded away long before they could enjoy widespread recognition. The U.K.’s Big Beat Records, long-standing champions of the re-release of forgotten and out-of-print vinyl in the CD format, have dug up The Corporation’s second and third releases – Get On Our Swing and Hassles In My Mind – on Wisconsin’s Age Of Aquarius Records.  The package’s extensive liner notes are written by Wisconsin music authority Gary Myers.  These nuggets reveal an ensemble that surely would have grown a following had the inevitable record company greed, money battles and chemical diversions not scuttled their plans.

Led by the handsome and talented singer Danny Peil, and backed by the Kondos brothers (multi-instrumentalist John on guitar, piano, flute, and harmonica and the younger Nick on drums), ferocious guitarist Gerry Smith, Hammond B-3 master Pat McCarthy and bassist Kenny Berdoll, The Corporation were quite adept at adopting the mind-enhancing sounds put forth by The Vanilla Fudge and Iron Butterfly.  But The Corporation had designs on world domination beginning with Brew City and circling outward.  Capable of wowing industry insiders and wigged-out fans alike, the band mixed hard psych pop with over-the-top six-string shredding and an ever-present organ’s Leslie-speaker swirl.  The vocal harmonies were exceptionally tight and the lyrics dealt with the familiar themes of peace, love and altered consciousness.  Songs shift direction without much warning and the musicianship is consistently impressive.

The Corporation had broken up by the middle of 1969, but they left behind an impressive body of work.  This is a must-have release for those seeking out the best psychedelic music of the period.  Maybe you didn’t think of traveling to Milwaukee to get your mind blown back in the day, but Big Beat has done a great job of showing exactly what you missed.