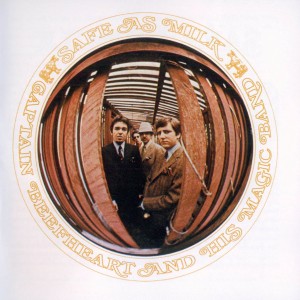 Captain Beefheart and His Magic Band – Safe As Milk

Part 2 of my ongoing examination of the music of the late Captain Beefheart steers us back to where it all began – his debut record from 1967, Safe As Milk.  Well, sort of.  The Captain actually recorded two singles for A&M Records prior to the release of Safe As Milk.  Because of the very straightforward sound of those singles, they are somewhat disowned by most hardcore Beefheart fans.  I won’t be discussing them here on ClassicRockMusicBlog.com.  Also, Buddah Records’ 1999 reissue of Safe As Milk includes seven bonus tracks.  Although these tracks are not from the Safe As Milk sessions (inexplicably, they’re from the sessions for 1971’s Mirror Man), they are so engaging that I will include commentary on them in this review.

Safe As Milk is evidence of the Captain embracing the influence of LSD and avant-garde artistry which would eventually culminate in the “masterpiece” Trout Mask Replica.  The material was far too dangerous for the relatively tame A&M Records and eventually found a home on the Kama Sutra label.  It’s also an example of one of the many times Beefheart pondered cleaning house and bringing in musicians that were more in tune with the direction he hoped to take his music.  He’d already planned to cut guitarist Alex St. Clair Snouffer and bassist Jerry Handley loose from the group.  Mainstay drummer John French was present for the sessions as was a 20-year old guitar prodigy named Ry Cooder.  The product of this outing thus landed somewhere between typical psychedelic music of the period, the conventional sounds of the Captain’s childhood favorites, and the Dadaist inclinations of his later recordings.

As Beefheart sprawled all over the musical map stylistically with Safe As Milk, there are a few tracks that stand out as superior experiments.  For example, “Dropout Boogie” is noteworthy in its mix of garage fuzz, the Captain’s trademark frayed vocal delivery, spicy use of marimba, and varying time signatures.  John French is the star here, demonstrating his ability to translate Beefheart’s skewed view.  The guitars, while sounding great, play it safe and never take the leap into sound sculpture as future Beefheart guitarists would.  “Boogie” is followed by a nearly straight doo wop reading in “I’m Glad.”  Here the Captain is using a horn section to hold himself back, but his voice is unfettered soul.

One of the better known songs from the Captain’s early catalog, “Electricity,” rounded out Side 1 of the original release.  If you’ve not heard it, you owe your ears the treat.  It’s pure psychedelia, but unlike anything recorded by the San Francisco groups or their imitators.  Beefheart sounds truly demented and pained while maneuvering through the stinging Theremins, guitars both jangly and sliding, and mechanically bouncing bass.  It makes attempts at becoming a blues song, but is far too spooky and alien to succeed.  Staying with the freakish haze on Side 2, the Captain staggered on to the “Yellow Brick Road.”  With its pinched guitar lines and Beefheart’s seeming entrance into a cave on the chorus, it’s nearly as wiggy as “Electricity,” but a bit more rooted in reality.

“Road” is followed by what may be my favorite early Beefheart track, “Abba Zaba.” Riddled with latin percussion, a bass solo, and the Captain’s sometime use of nonsensical syllables in place of lyrics, it’s a two minute and forty-four second ode to a candy bar.  It’s also proof that Beefheart hadn’t yet decided to dispense with rhythm and could get downright groovy when he wanted to.  Side 2 closed with the off-kilter “Autumn’s Child,” a ballad of sorts.  This song tries to tell a tale of the promise and loss of love, but plays out like a string of movements rather than a demonstration of standard verse-verse-chorus structure.  The creepy Theremins return and the tempo changes every time stability attempts to poke its head out.  It’s here where you could still argue that Beefheart’s music may have influenced Frank Zappa rather than the other way around.  Brilliant!

So what’s the skinny with these bonus tracks?  Well, what may have prompted Buddah to tack on these particular songs is that one of them is called “Safe As Milk.”  More likely, the label saw these recordings as stemming from the ideas first presented on Safe As Milk and that they featured the same musicians, with guitarist Jeff Cotton replacing Ry Cooder, who by this time had departed for saner pastures.  The Mirror Man sessions began in late 1967 as a concept for a double album of pieces recorded live in the studio.  That idea was abandoned by Beefheart (as he was simultaneously being ignored by Kama Sutra) and some of the tracks would later be re-recorded for Beeheart’s second album, Strictly Personal.  The remainder wouldn’t see the light of day until Mirror Man’s release nearly four years later.  Meanwhile, the unfinished pieces that were saved had floundered in limbo until Buddah’s CD reissue of Safe As Milk.  I could draw you a road map, but you’d still have a tough time following along.

So, speaking of “Safe As Milk,” it’s a wobbly song made more wobbly by the pogo bass line and the flexing slide guitar.  It chugs and churns below a powerful and nearly unintelligible Beefheart vocal.  Instruments go in and out of tune and John French eventually lets the beat fall to amateurish clickity clacking.  All the ruckus is intentional, of course.  Contrast this with the bonus track, “On Tomorrow,” and its opening’s scuffing bass and low-register guitar chords.  French keeps things rolling along as various wiry guitar noodlings disappear as soon as they’ve appeared.  The song seems to drift off into something other than what it set out to be, but continually returns to recognizable patterns.  But, mind you, “On Tomorrow” is an unfinished instrumental recorded live in the studio and The Captain is nowhere to be found.  Although his antics are missed, the song gives us the chance to experience just how tight and experimental His Magic Band had become in this configuration.

“Flower Pot” is another of those Beefheart tunes with one foot in the blues and the other dangling over the abyss.  It’s another instrumental and not quite as engaging as “On Tomorrow.”  It would have been interesting to see where the band was headed once Beefheart laid down the vocals.  The bonus fun ends with two songs over seven minutes in length, “Trust Us” and “Korn Ring Finger.”  “Trust Us” wanders over several landscapes, first with chants, howls, and recitations, then into one of the Captain’s best hooks.  Along the way there’s a very jazz-influenced lead guitar line, an instrumental break that wouldn’t have been out of place in a Quicksilver Messenger Service set, a brief drum solo, Beefheart’s rant about the “lying liars” over a military beat, and a haunted, double-tracked vocal breakdown.  It’s pretty ambitious for a song that unfortunately never saw the light of day at the time it was first composed.  “Korn Ring Finger,” however, is more a lumbering beast than a clever monster.  Beefheart’s distorted voice forecasts Jerry Garcia’s delivery on “What’s Become Of The Baby?” and even delves into something reminiscent of Tuvan throat singing.  For good measure, Beefheart also deploys some of the most off-key harmonica noise he’d ever recorded.  This is our good Captain in his most unhinged moment.

Is Safe As Milk a classic?  Absolutely!  There wasn’t much else going on in 1967 that was as bent as this music, but that’s what makes it so significant.  It’s the origin of a man too stubborn for his own good and ignorant of the elements that make records into products.  It’s aural painting from a legend in the making and deserves a spot in any classic rock collector’s cabinet.