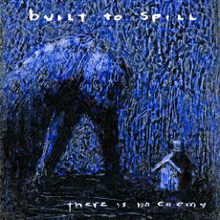 Built To Spill brings their seventh studio album, There Is No Enemy, to a fan base starved for new material since 2006’s You In Reverse.  The Boise, Idaho, quintet (originally a trio) has been steadily gaining followers due to their nearly 17 years of recording and touring, bringing a refreshing sound that has now become very identifiable as their own.  Led by guitarist and vocalist Doug Martsch, the combo is rounded out by bassist Brett Netson (not to be confused with…), multi-instrumentalist Brett Nelson, guitarist Jim Roth, and drummer Scott Plouf (formerly with The Spinanes).  There are few surprises on Enemy, but, as always, several moments both spectacular and elegant.

Martsch has often been compared to two other guitar gods, Neil Young and J. Mascis of Dinosaur Jr.  This is accurate in that none of the three can be considered vocalists with exceptional ranges, they all tend to sing in a higher register, and their approaches are unconventional.  That being said, Martsch, like the others, brings vocals that are exactly what is necessary for the songs he composes.  At the same time, he can go from playing lush guitar melodies to absolute shred in order to make his point.  His voice and playing are thus highly endearing just as with performances from the better known players that I’ve mentioned.

One track that stands out as a great example of Martsch’s brilliance is “Nowhere Lullaby.”  The lyrics seem to refer to Built To Spill themselves, lamenting “15 years that just fly by” and that “you’re still here and you don’t know why.”  At ballad pace and with a beautiful, ringing lead guitar melody, it serves as both a “thank you” to their devoted fans and a self-deprecatingly humorous head-scratcher questioning how the group has remained together for so long.  Guest John McMahon provides both cello and weepy lap steel as the band laughs so hard they could cry.

The beat picks up and the guitar effects come out of their boxes on “Good Ol’ Boredom.”  Martsch and crew take the opportunity to show off their chops, not flamboyantly or masturbatory, but more in delivering sliding arpeggios and phased tones.  This song makes great use of the group’s three guitarists as they all come at the song from different angles.  The rock and roll thunder is also unleashed on cuts such as “Pat” which uses the talents of Martsch’s former bandmate from Treepeople, Scott Schmaljohn.  In less than three minutes, “Pat” delivers more crunch and splattering cymbals than found on the total remainder of Enemy’s songs combined.  Again, we have guitars coming at us from every direction, some heavy, some chiming.

There are other guest musicians on Enemy, such as Sam Coomes (of The Donner Party, Heatmiser, Pink Mountain, and Quasi, among other groups) who plays organ and mellotron on “Done.”  The Butthole Surfers’ Paul Leary drops by to lay down sounds on “Oh Yeah,” and Roger Manning of Beck’s band and Jellyfish plays organ on the final two songs, “Things Fall Apart” and “Tomorrow.”  These appearances are more collaborative than you’d expect with the performances melding perfectly to Built To Spill’s trademark style.  “Done” is the best evidence of this as Coomes’ keyboards sound much like the typical, intriguing burble that you’d find layered beneath one of the band’s songs.  Other highlights on Enemy include the trapped in time anthem “Planting Seeds” with its power chords and Neil Young-style guitar fills, as well as the slow-mo echo chamber of “Things Fall Apart” with its foreboding lyrics, pulsed guitar and trumpet solo.

Built To Spill has obviously not run out of clever ideas nor have they lost the will to have fun presenting them.  They are a band that’s always remained in-character and they’re much more interested in winning people over by maintaining consistency and integrity than by brewing up the flavor of the day.  There is No Enemy easily ranks among my top five of 2009, and I defy anyone that takes the time to sit down for a listen to walk away afterwards unaffected.  More than likely you’ll be hungry for more and saving your money to stock up on Built To Spill’s back catalog.