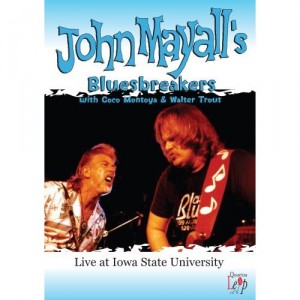 The legendary John Mayall, prime instigator of the 1960’s British blues movement, had decided to revive the Bluesbreakers name with a top-notch quintet, including guitarists Walter Trout and Coco Montoya, circa 1984.  This combo was at the peak of their powers in 1987 when a gig at Iowa State University was captured on camera.  The video from this show has seen the light of day courtesy of a few different companies, but the latest version is out on Quantum Leap.  Although this configuration of the Bluesbreakers would only exist for another two years, it’s quite clear that they were having a blast backing Mayall at what he does best — faithful takes on the blues that are equal parts entertainment and history lesson.

There are two major quibbles that I have with this release.  The track listing in the DVD menu and what’s printed on the case do not match the actual order of the songs in the concert.  Also, Montoya, the crew, or the venue were having some sort of technical difficulties which resulted in Montoya’s guitar being too quiet for the mix. That aside, the nine-song set covers a lot of ground and serves as a showcase for Mayall’s flexibility as a performer and for the raucous brilliance of Walter Trout.

Beginning with Mayall at the organ on “Birthday Blues,” the band lets their leader set the mood for what’s to come.  The guitarists know that they’ll get their turn in the spotlight and Trout takes one on Mayall’s own “Little Girl.”  On the Bluesbreakers’ classic, Mayall takes a back seat as a sweaty, manic Trout gets warmed up on his Strat.  Mayall next steps up to the front of the stage, harmonica in hand, for another Bluesbreakers’ gem, Little Walter’s “It Ain’t Right.”  Soon afterward, Mayall has strapped on his own guitar and is providing lead lines for “Rolling With The Blues.”  Trout again delivers a blazing solo that has the viewer wondering if Trout is going to step out of his pants, fall off the stage, or spontaneously combust.  The rhythm section consisting of drummer Paul Hines and bassist Bobby Haynes are tight throughout the performance, but shine especially brightly on “Rolling” and the track “Riding On The L & N.”  Mayall opts to provide slide guitar here while Montoya provides perfect back-up harmony vocals.

I we overlook the trappings that date this show, such as the outmoded hairstyles and clothes on the subdued white folks in the audience (Mayall himself is not immune, bearing a Harley muscle shirt and shaggy mullet) we’re treated to a very solid show from this short-lived band.  Mayall has always been a man enraptured by the myths and realities of American Blues.  That respect has never waned over his 40+ year career and Live at Iowa State University is a charming document of the energy spent during Mayall’s musical love affair.