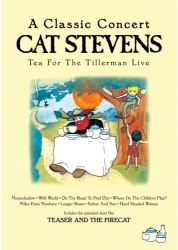 It’s too bad, but it’s become difficult to separate the man who was Cat Stevens from the current Yusuf Islam, and the great music he once made. Music and politics have never gelled with me, per se, so I won’t proceed with that discussion.

Instead, we can enjoy a snapshot of Stevens in a rare 1971 performance, when he was making waves on both sides of the Atlantic with his well-crafted and -played folk/pop tunes. The DVD A Classic Concert, Cat Stevens, Tea For The Tillerman Live, captures Stevens, guitarist Alun Davies and bassist/percussionist Larry Steele in an intimate setting at Los Angeles’ KCET Studios. The set list, just eight songs, reads now like a greatest hits medley: “Moonshadow,” “On The Road To Find Out,” “Where Do The Children Play?,” “Wild World,” “Miles From Nowhere,” “Longer Boats,” “Father And Son” and “Hard Headed Woman.” At the time, however, most of these tunes were just finding life, and it’s with that spirit that Stevens breathes a lovely spark into each song. Stevens gives a particularly passionate reading of “On The Road To Find Out,” which these many years later could be seen as his statement of purpose.

The music is capped by Teaser And The Firecat, a short, animated film with characters fans will recognize from his album covers of the period. The story of Teaser and The Firecat is told, as the two try to set a fallen, wayward moon back in place, and are eventually aided by a group of owls. The animation has a delightful and innocent feel of the times, accompanied by, no surprise, Stevens’ “Moonshadow.”

This is a short but intriguing glimpse of a singer/songwriter in his prime. Wish I was there.