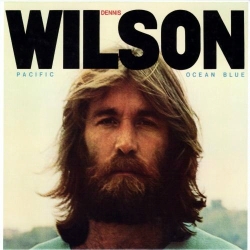 Dennis Wilson’s solo album Pacific Ocean Blue achieved something of mythical status, the 1977 release being out-of-print on CD since 1991! Collectors were left little choice but to either shell out big bucks for an out-of-print CD copy, or try to secure a decent vinyl copy.

So the waiting and anticipation kept building. Fans wanted to know, “Would POB ever get reissued on compact disc?” Well, the answer came in June 2008, when Sony Legacy unleashed a two-disc set containing a remastered version of POB, along with previously unreleased tracks AND the tracks from Wilson’s unfinished follow-up Bambu. In all, we’re treated to 33 tunes.

Pacific Ocean Blue is simply stunning. And stunning in many ways. Firstly, because Dennis was now bettering brother Brian’s music, and writing material that was far removed from the surfing days and tales of hot rods. Secondly, the diversity and range of the music across, 15 tracks with bonuses here, are proof positive that Dennis Wilson writes, plays and sings Dennis Wilson music. There’s nothing quite like it. Where much of the Beach Boys’ music was bright and sunny, Wilson’s music has a much darker tint, even when he’s singing about love and hope. The arrangements are also characteristically grandiose, but with an edge. And Wilson’s voice, honed/punished by several years of booze and hard living, had taken on a rough polish. Though his vocals sometime teeter on the edge of breaking, they seem almost necessary to convey the message in these tunes. There’s no separation between Wilson’ voice and his psyche and soul. Fortunately, the music here was expertly remastered, and the songs on POB are presented with all the layers of sound front and present.

“River Song” opens it all, an expansive gospel-like production, sounding almost like a lost Elton John track from the early ‘70s. “What’s Wrong” is an upbeat rocker that would have fit comfortably on the Beach Boys’ Sunflower or Love You. “Moonshine” is one of those tunes that could have only come from Dennis Wilson. It begins like some murky cabaret before turning into a slow, melodic lament. “Friday Night” pays tribute to the white punks and others who play rock music that’s good for the soul. The beginning sounds not unlike Pink Floyd’s “Shine On You Crazy Diamond,” before picking up a slow, insistent groove. “Dreamer” is a horn-laden delight that shifts into a beautiful hymn-like break, with Wilson imploring, “Let the wind carry your blues away…” “Thoughts Of You” features Wilson’s delicate piano playing and brusque voice. Beginning as a gentle love song, it builds into an impassioned middle with Wilson singing, “Look at love, look at love…” “Time” is another gorgeous love song with a haunting – and then electrifying R&B – arrangement. Wilson’s voice displays the wonderful vulnerability that characterizes much of his work. “You And I” is smooth jazz done right, with a breezy tropical feel, and one of three POB tracks he co-wrote with wife Karen Lamm-Wilson. The title track is a funky, gritty blues (co-written with Beach Boy Mike Love) decrying the plight of an increasingly exploited Pacific Ocean, where seals and otters are slaughtered. “Farewell My Friend,” is an incredibly touching tribute to family friend Otto “Pop“ Hinsche, while “Rainbows” follows with a joyful mandolin line and is as upbeat as possible. “End Of The Show” is the original ending proper of POB, and a spine-chilling song about the metaphorical (perhaps prophetical and literal?) end of the show.

Four bonus tracks follow, all previously unreleased: “Tug Of Love,” “Only With You,” “Holy Man” and “Mexico.” “Tug Of Love,” with its multi-layered vocals sounds like a lost Smiley Smile track. “Only With You” is an intimate look at his private life with Lamm-Wilson. The instrumentals “Holy Man” and “Mexico” are unexpected highlights that  show Dennis, like brother Brian, wasn’t just a songwriter, he was a composer.

Pacific Ocean Blue isn’t just a great Wilson brother solo album, it’s as good as anything the Beach Boys did – ever.

By the time Wilson began recording tracks for the unfinished Bambu, his voice had splintered into a craggy but still powerful instrument. On songs like “Under The Moonlight” and “He’s A Bum,” it sounds almost as if Wilson knows his days are numbered and sings with tongue planted firmly in cheek. His singing on “Love Remember Me” almost sounds purposefully affected, but it’s just the document of where Wilson was physically and emotionally. It’s an incredibly resonant track. “Common” sounds like an early Chicago track, and it’s full of the wonderful chordal piano playing that makes Wilson’s music so magical. “Constant Companion” is a slinky, funk-fest, and one the track probably closest to something brother Carl would have done in his solo work. It’s also one of several tracks that see Wilson’s newfound love interest, Fleetwood Mac-er Christine McVie, shaping the context of his lyrics and music. The lone Bambu bonus features Wilson’s “Holy Man,” with guest vocals by Foo Fighter Taylor Hawkins, and the track sounds uncannily like it’s Wilson himself singing here.

Though Bambu doesn’t have the feel of continuity or “album” vibe of Pacific Ocean Blue, it’s still a fascinating and compelling document of a late bloomer whose music declared itself (screamed to come out) as the messenger, all the while, plunged into self destruction.

This is likely to take release of the year in my book.