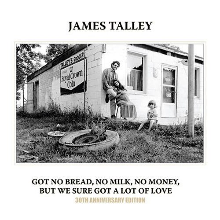 I remember reading about James Talley‘s Got No Bread, No Milk, No Money, But We Sure Got A Lot Of Love back in high school. By those who heard it, the LP was hailed as a classic mix of blues, folk and Western swing. I searched for a copy for years in used record stores and came up empty. Lo and behold, I just needed to wait a couple decades for a CD reissue. Talley is a master of spinning back-porch tales of hard-working common folk and painting musical portraits of the United States. Talley is also an understated guitar player, sublime melodicist and lyricist of high wit. Like Willis Allen Ramsey, Emitt Rhodes, Jimmie Spheeris, Stu Nunnery and others I’ll get to, Talley has remained too long on the fringe of popular music. Think of a 1970’s version of Swing legend Bob Wills and all that once was good about country music and country rock and you’ll find it with Talley.

Is it classic rock? No. But it’s classic music that should be heard by all who think the songs of Alan Jackson or Kenny Chesney are actually acceptable.  Talley put his boot down long ago and was as much of an outlaw as Waylon Jennings, Willie Nelson or Johnny Cash. When Talley sings about the joys of cutting loose on a Saturday night, the lament of an old railroad conductor let go or the steady memory of the Red River Valley, I actually believe him, and you will, too. It’s a song cycle of rural American life that hints at John Prine, Bob Dylan, Earl Scruggs and even Hank Williams, but exists totally on its own.

This is a beautiful, timeless and perfect record.

One thought on “James Talley – Got No Bread, No Milk, No Money, But We Sure Got A Lot Of Love”