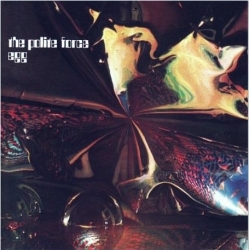 Egg’s The Polite Force is one of many excellent reissues I recently received from my friends at Esoteric Recordings. This UK-based label specializes in “good music,” with a far-ranging artist roster including Bill Fay, Keef Hartley, Claire Hamill and Paladin.

The Polite Force was originally released in 1971, and features the trio of keyboardist Dave Stewart, bassist/vocalist Mont Campbell and drummer Clive Brooks – ¾ of former band Uriel (minus guitarist Steve Hillage). Egg have often been compared to Emerson, Lake & Palmer, and the musicianship is certainly top-end in both cases, but Egg seem to go less for speed than melody mixed with a dash of dissonance.

Stewart is often associated with the “Canterbury Sound,” that indefinable genre that linked English bands such as Caravan and Soft Machine, although Stewart was never geographically part of the Canterbury scene. Still, some of Egg’s music has that clean, almost friendly, Canterbury sound, coupled with plenty of improvisation, tricky rhythms and cheeky humor. The music convincingly hints at Dave Brubeck, Caravan, Pink Floyd and the avant-garde, without being derivative.

“A Visit To Newport Hospital” opens with an almost Black Sabbath-like dirge before slipping into a jazzy organ riff, and Campbell recounting the members’ early days performing as Uriel, “We spent our time avoiding skinheads and the law. It was a freedom that we never felt before. And now we’re doing this instead.”

“Contrasong” is a jerky, fun and rhythmically disjointed romp across time signatures that’ll challenge you to keep the beat in your head. Saxophones seem to bounce directly off the angular piano line. It’s irrepressible fun. Brooks is endlessly inventive, displaying a deft touch and creativity that makes this and other songs sparkle. His bass drum foot seems detached from his body!

“Boilk” – a 9-minute-plus instrumental, bogs down under an experimentalism that never lifts off, but it’s the lone dud here.

The four-part capper, “Long Piece No. 3,” is a tour de force at more than 20 minutes, and showcases the breathtaking diversity these three musicians are capable of. Whether it’s the multitude of tones from Stewart’s keyboards (sounding like Robert Fripp at the end of “Part Four”!), Campbell’s clever bass lines and arrangements or Brooks’ tireless timekeeping (listen to his clean, powerful playing on “Part Two).

I’m happy to have such eggs in one basket.